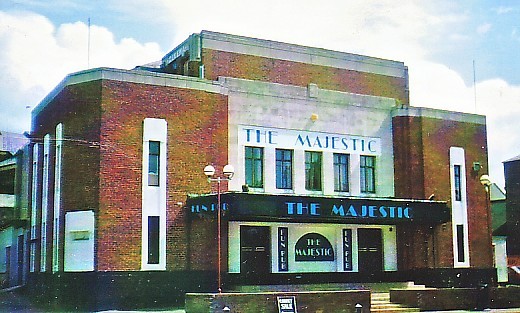 The Majestic Cinema was Caernarfon’s "Super Cinema", built for Captain W.E. Pritchard and his partner E.H. Jonathan in 1934. Seating 1,050 patrons with Western Electric Sound, a proscenium of 26 feet in width and containing a café for its patrons, it provided luxury cinema at affordable prices ( 6d to 1/6d on opening.) It changed hands following Capt. Pritchard’s death in 1945, when it came into the hands of Guy Baker’s Paramount Picture Theatres Ltd., CinemaScope was fitted in 1956 when seating fell only marginally to 1,048 patrons.

In 1963 wrestling was introduced on one night per month with popular wrestlers of the day like Billy Two Rivers and Giant Haystacks making appearances and popular local bands being booked for the intervals of these promotions.

Following the death of Guy Baker the cinema closed and re-opened after conversion work in new ownership as the Majestic Entertainment Centre, a ‘fun pub’, with no films being shown. Later it was converted into The Dome nightclub. On the 16th January 1994 it was destroyed by fire, a 21 year old man being charged and convicted of arson over the fire. Today open land next to the Celtic Royal Hotel is all that remains.

Here’s a rather hazy photo of the Majestic.
View link

Thanks for the photos Eric.

The equipment at the Majestic consisted of two Kalee 12 projectors and the wonderfull Peerless magnarcs lamps,and as already mentioned above Western Electric sound system.

I was told that the equipment may have still been there at the time of the fire, even though it’s function during the last few years was that of a nightclub. I have no way of knowing if this was true.

Like the circuit’s other cinema in Pwllheli, the Majestic had a cafe which was a very popular and pleasing meeting place.