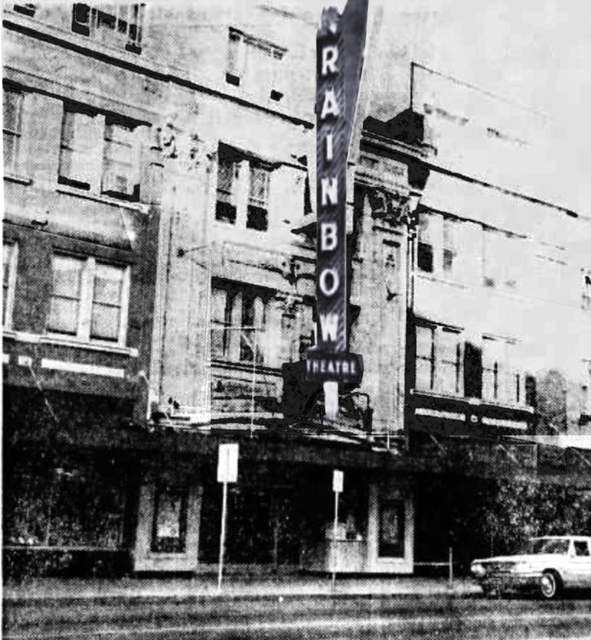 The Pantages Theatre was located in the Rocky Mountain Insurance Building. It was built in 1914. The Pantages Theatre was initially a vaudeville house. The architect was George H. Stanley. The theatre seated 1,200 which included the main floor and two balconies and three lower boxes on each side. The exterior of the building was done in Beau-Arts Eclectic style, but the interior of the theatre was done in a French Renaissance style.

In 1924 motion pictures became the entertainment focus of the future for Great Falls and the Pantages Theatre was renamed the Rainbow Theatre. The theatre closed in 1935, but was reopened at the beginning of WWII. The theatre closed again in 1964 and was let deteriorate and one of the balconies caved in and the auditorium became a covered parking area. Fox theatres operated the Rainbow Theatre from the early-1940’s until its closing in 1964.

When I did a image search on Bing the building came up but it looks like there was a major fire in the upper portions of the building. There is a covered walkway along the front and side of the building. But I could find no info on the fire. You can see the building by hitting the map key in the header.

Any further information on the Pantages/Rainbow would be appreciated.

Apparently it was housing a church, according to this article (new window) which also has information about the fire.

Sounds like it was gutted inside, and is just a shell now. Apparently the job time and neglect started when the auditorium caved in 30+ years ago is now done.

Sorry about that, Chuck. The second link does work. Here are a couple to replace the first one:

Here’s a post on a local news blog from when the fire broke out, including a photo of the burning building.

Here’s the website for Public Drug Co. , who operated out of the first floor store front for 74 years before the fire wrecked it. They now operate from a new location, and the website tells the story of the fire from their end.

Here’s a couple of YouTube videos shot during the fire: One and Two(this one takes a few seconds to start)

And, finally, here is a set of exterior photo taken the day after the fire.

All these links worked – checked them before I hit submit. Enjoy!

OK……I’m not sure what the issue is here. I never said they were in the theatre lobby, and if I unintentionally implied it, I apologize. I merely thought it would be interesting to read about the fire from the perspective of a tenant who’d been in the space for almost 75 years. They saw the movie theater rise, fall, rise again, fall again, and then literally fall.

It is my understanding that the ornate terracotta area is the entrance to the former Rainbow. It has a graceful arch that reminded me of a theater arcade or outer lobby from the first time I saw it. However, I have only known it as leading to a cavern with cars entering and leaving. The arch is just visible over the plywood shielding. There was good news in the Great Falls Tribune earlier this week. They published a nicer picture of the building and stated that Set Free Ministries had raised $30,000 and had just received an anonymous gift of $100,000 to continue on the reconstruction.—-Again, the Google pin is miles off probably because the correct address should be 601 or 611 Central Ave. For some reason I could not back off any farther but one only needs hold left mouse button and explore without changing the street view now that it is set.

Here is a link to a site that has a great photo that shows details of the wonderful terracotta facade of the Pantages aka Rainbow. It will probably require copy and paste. http://www.trailergypsies.com/Montana/Great%20Falls.htm

i put together a report on the building and the theater’s history, including several original photographs. if you would like it email Carol at and we can work to put it up on this page.

The short lived Rainbow Theatre #1 in Grand Falls – unrelated – opened in 1909. This theater’s run as the Pantages ran for only weeks from its opening on August 10, 1914 to its epic failure closing after September 6, 1914 amidst financial troubles it could not overcome.