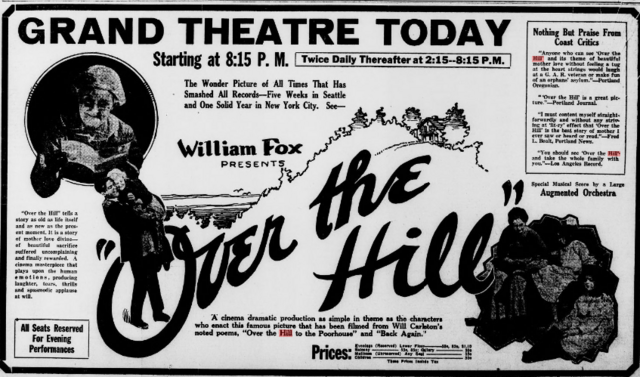 The Grand Falls Opera House was opened on January 4, 1892. By August 1915 it was operating as the Grand Opera House. It was renovated in 1920 and was renamed Grand Theatre, eventually becoming a movie theatre. Advertisements exist for this popular theatre in 1921. The Grand Theatre was still open in 1933, operated by the Denver Division of Fox West Coast Theatres. It was listed in Film Daily Yearbooks from 1934 to 1943 as (Closed). By 1946 it was staging special events, such as boxing matches. It was demolished in 1955.

The Grand Theatre opened as the Great Falls Opera House on January 4, 1892. In style it was a slightly awkward combination of Romanesque and Queen Anne Revival, and was designed by Chicago theater architect Oscar Cobb. It was the leading entertainment venue for Great Falls for many years, still quite popular when Al Jolson made an appearance there on August 31, 1915, by which time it was known as the Grand Opera House.

But after more than a quarter of a century the Opera House was in need of updating, and in 1920 a $50,000 renovation was undertaken. Nothing was changed in the auditorium, which was merely refreshed, as it was blessed with excellent acoustics, but the lobby, lounges, offices, and stage were modernized. After this it was known as the Grand Theatre, though for some years, some high-toned events were still advertised as appearing at the Grand Opera House. I’ve been unable to discover when it became predominantly a movie house.

The Grand also had a life after its years as a movie theater. I found an obituary for a woman who met her husband while they were both working scenery at the Grand in 1946. I’ve also found records of wrestling matches taking place at the Grand in 1947 and 1948.

Sadly, the Grand Theatre was demolished in 1955. I’ve been unable to find the address of the Grand, but it was located on Third Street near Second Avenue North.