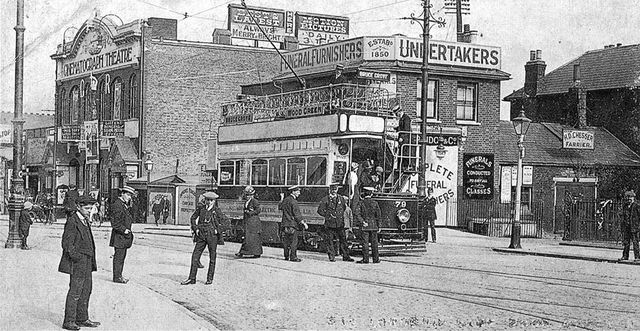 Located in the north London district of Wood Green, on the corner of Lordship Lane and Redvers Road, almost opposite Wood Green Underground (tube) Station. The Cinematograph Theatre was opened in 1911. There was a market hall on the ground floor of the building, with the cinema located upstairs on the first floor.

It was later re-named Market Cinema, and was closed around 1919. It then began use as a warehouse.

In the 1960’s, it was in use as an independent bingo club, and also a dance studio operated from the building. These were closed in the mid-1990’s.

In 1998, the site at what was known as Spouters Corner (today known as Hollywood Green) was purchased by Hoyts, to build a new 6-screen cinema on an enlarged site. The former Cinematograph Theatre/Market Cinema was demolished, together with all other properties on the block, and the new building was erected. But Hoyts backed out of exhibiting in the UK and the building stood empty for a couple of years. It was eventually fitted out and opened by Showcase Cinemas in September 2001, and is now operating as the Vue Cinemas.

There is a photograph here: