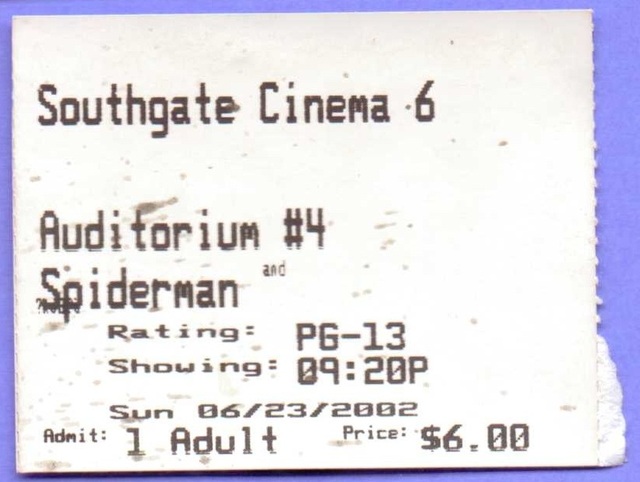 Opened as Southgate Cinema 1 & 2 in the early-1970’s. In around 1988, it was expanded to six screens. Taken over in 2007 by Charlotte-based Southeast Theatres Corporation. After a brief closure in April 2011, it was taken over by new owners in June 2011, and renamed Bear Town Cinema 6.

Opened ~1998 approximate? Can anyone verify the exact date?

rayson, You write it opened under Southeast in 2007. My guess from the date I found, looking at the map, the areial photo, the condition of the roof and parking lot, the theater was run by someone else before Southeast??

This theater, which had briefly closed in April of 2011, has reopened and is now the Bear Town Cinema 6: http://www.newbernsj.com/news/cinema-97919-bear-midnight.html.

If my memory serves me this theatre was opened by an independent owner of a local grocery store chain. At that time I think it was a twin screen, early 80’s. The owner was a very successful and interesting fellow who’s name escapes me at the time. He also operated a Drive-In next to one of his grocery stores on Hwy.70. On one of my service calls here a customer passed during the presentation of “Carrie”. After the owner passed the company changed hands to Southeast Cinemas.

This theatre was built in the early 1970’s as the Southgate Cinema 1 & 2, possibly Eastern North Carolina’s first twin indoor cinema. The owner was Gordon Parrott of the Gordon’s Foodland supermarket chain. One of the Foodlands was next door to the Southgate Cinema (last time I was in New Bern it was a Piggly Wiggly), and Mr. Parrott also owned the Midway Drive-In on Old Cherry Point Road near another one of his Foodland stores. The Southgate was expanded to six screens about 1988-1989. I lived in New Bern from 1990 to 1995 and the Southgate was the larger of New Bern’s two cinemas (the Neuse Boulevard Cinema, then operated by Carmike Cinemas, had only three screens). I spent many hours watching movies at both theatres when I lived there. The Southgate was one of only two theatres in eastern North Carolina to show the NC-17 rated film “Showgirls” (the other was the UA Litchfield 4 in Goldsboro). I am surprised to learn that this theatre has been closed and reopened, as it was the best cinema in town.

According to FOX Eastern Carolina (WFXI-8 and WYDO-14) News at 10 on September 12, 2012, the former owner of the Southgate/Bear Town Cinema 6 (Southeast Cinemas) is building a new stadium multiplex in the Craven Thirty development on the western edge of New Bern. Scheduled to open in 2013 at the US 70/NC 43 interchange, this new theater may wipe out both Bear Town 6 and Neuse Boulevard 3 Cinemas. It will be the first completely new theater built in New Bern since the original Southgate Cinema 1 & 2 opened about 1974.

The theater is no longer a part of Southeast Cinemas. As of September 12, 2012, this was the theater’s official website: http://www.beartowncinema.com/

Stadium seating was installed in the original two auditoriums around 1999 (probably influenced by Greenville’s Carmike 12, which opened in 1998). The ticket stub above was from the last time I went to the Southgate; none of the four added screens had stadium seating at that time.

No progress has been made on the proposed Southeast Cinema on the west side of New Bern as of May 14, 2014 (the project was announced back in September 2012). That cinema will most likely never be built as it is outside of the city limits heading towards Kinston. New Bern’s growth is occuring along US 17 Business South (Martin Luther King Jr. Blvd.) towards Jacksonville and US 70 East towards Havelock. A new cinema for New Bern (which hasn’t had a completely new cinema built there in 40 years) would most likely be built on Martin Luther King Jr. Blvd. south of US 70 West as this is where all of the major chain stores are located. A location on US 70 East (across the Trent River from downtown) is possible but would put the squeeze on Carmike Cinema 6 in Havelock. For the time being the Bear Town 6 and the Neuse Boulevard 3 cinemas are safe; Southeast Cinemas won’t be building in New Bern anytime soon (if at all).

This cinema was opened in 1972 as a rocking chair twin. It was owned by Gordon Parrott, who also owned a small chain of grocery chairs and the nearby Midway Drive In.

After Mr. Parrott’s death, it was leased by the owner of ITBS out of Charlotte who operated it from 1988 until 2011. The cinema was expanded to six screens that opened early fall 1989. There were three different corporation names during that time, as the chain grew, but the same owner of the business.

The property was sold around 2009, and in May of 2011 the new property owners claimed a technical breaking of the lease and blocked all doors during the night with bulldozers. They began operating the cinema some months following that. The issue is still in litigation.

There are several companies, Southeastern, Carmike and rumored several others who have been in contact concerning a new shopping center and housing development owned by Weyerhauser. Most proposals appear to be related to state of the art cinemas of between 14 and 16 screens.

Carmike would be the most likely candidate to build a new multiplex in New Bern. Carmike has two multiplexes in Jacksonville (Carmike 16 and the new Patriot 12), a sixplex in Havelock, and others nearby (Greenville and Washington). Carmike has re-entered previously abandoned markets in North Carolina before – the Carmike 10 in Wilson was built at the same mall where they abandoned the three-screen Parkwood Triple a few years before.