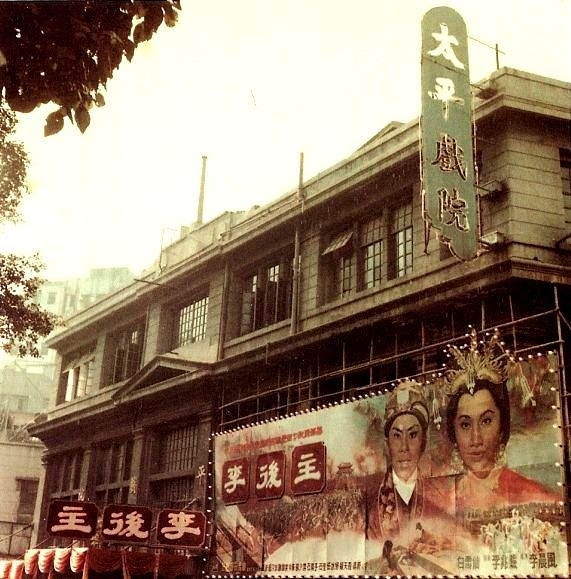 The Tai Ping Theatre was situated in Shek Tong Tsui on the Hong Kong Island. The theatre opened in 1904 and demolished and rebuilt in July 1931 due to its dilapidated state of the building structure.

Tai Ping is the Cantonese pronunciation of its Chinese name, literally meaning "peace all over the world."
The theatre was a venue for Cantonese operas and social functions, and silent films were also shown after a screen was installed. Boxing matches were reportedly held at the theatre. Advertising film of a restaurant was also reportedly shown at the theatre during a function celebrating the birthday of Confucius.

When Prince of Wales visited Hong Kong in April 1922, a banquet was given at the theatre in his honour by the Chinese community of the Colony. An article published by the Hong Kong Telegraph on 8th April, 1922 had a thorough description of the banquet.
"Inside the building the scene was unique and brilliant. The 40 tables, at which sat the guests and hosts, were arranged in front of the stage. The Prince’s table being right in the centre. This had a beautiful covering of Imperial yellow silk, upon the front of which was a dragon exquisitely embroidered. On either side of the table two great Chinese lanterns hung from the ceiling each bearing the word" Welcome" in Chinese characters.
"At the back of the table was the"Retiring" or "Dragon" Room to which the Prince was taken before the banquet. The frontage rising above the entrance was ablaze with electric lights. Bulbs also gave a softened glow from behind a kind of glazed material covered with Chinese characters at the side of the entrance. A fine blackwood screen in the opening gave privacy to the room. Rich hangings of scarlet silk embroidered with birds in gold and other colours were caught back on either side at the entrance. From the ceiling at the four corners of the apartment hung baskets of flowers, linked with festoons which also ran out to meet a similar bouquet suspended from the centre of the canopy.
"The total effect in the theatre was most impressive, the whole place being brilliantly illuminated with arc lamps and electric lights with silk shades. The stage was typically Chinese, rich with coloured cloth hangings. Pot plants and electric bulbs delicately shaded in red and blue silk, completed the striking transformation of the Hall."
And according to a report printed by the Hong Kong Daily Press on 8th April, 1922, the galleries of the theatre had been entirely screened off, and dinner was served in the stalls, which had been brought to one level by means of temporary flooring.

The rebuilt Tai Ping Theatre opened to business on 31th August, 1932 with "Sky Bride". The new theatre was designed by architects Palmer & Turner and had an auditorium with stalls, balcony and gallery. Up-to-date talkie machinery ordered from the Western Electric Company was also installed.

Besides stage performances and social and school functions, first run English language and Chinese films were also shown at the theatre.

During the war years, the theatre was expropriated by the Japanese Armies.
The theatre re-opened after the war and showed Chinese and English films until its closure on 12th February, 1981.
A residential building was built on the site of the theatre.

This site has a press release about an exhibition about this theater; at the bottom is a photo of a model of Tai Ping which was part of the exhibition. Click on it to enlarge: View link

The interior of the model. mentioned above: View link and
View link

There is a an exterior photo of the Tai Ping Theatre on this webpage (second one, scroll down a bit): View link