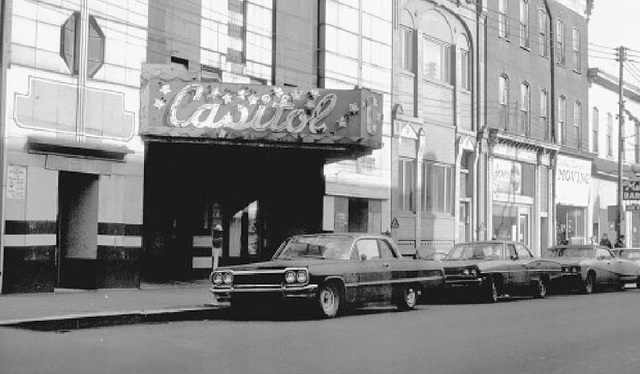 The Times Theatre was operating prior to 1938, when it was remodeled in a ‘Moderne’ style to the plans of architect Samuel Barbalat. It was closed in the early-1950’s.

In 1956, it was re-opened as the Capitol Theatre, after the original Capitol Theater across the street had closed on April 28, 1956 (it has its own page on Cinema Treasures). The theatre had been renovated and a new marquee installed, with the Capitol name. It has since been demolished.

Boxoffice Magazine of October 15, 1938, had an article about theater remodeling which featured a photo of the Times Theatre’s new facade. It can be seen on this page at the magazine’s archive.

Here is a 1982 photo of the Times Theatre after it had been renamed the Capitol.

Yes, This was the “second” Capital in Braddock, I have old Braddock papers with ads from the 1930s that show the “Capitol Theatre” at another address. But this IS the one I remember! What I would like to know is when THIS incarnation closed? (1960s-early 70s?)

An item about the Times Theatre in the “Theater Changes” section of the April 9, 1938, issue of The Film Daily says that the house (under construction at the time) was owned by the Crystal Amusement Company. I’ve found references to the company in trade publications of the 1910s and 1920s, too, and there was a Crystal Theatre operating in Braddock at least as early as 1908, when it was frequently mentioned in The Billboard and Variety. At least as early as 1910, the company also operated a movie house called the Family Theatre.

There were quite a few theaters in Braddock in the 1910s and 1920s. I’ve found references to a house called the American, operating at 1616 Braddock Avenue in 1916, a Knickerbocker Theatre operating in 1917, and theaters called the Braddock, the Grand, and the Colonial operating around 1922-1923, along with the Crystal and Family, both still open at that date.

I haven’t been able to discover a definite address for the Crystal Theatre itself, but the company was located at 860 Braddock Avenue according to an item in The American Contractor of June 17, 1922, and the offices might have been the theater building. Aside from the American, which I found mentioned only once, I have no idea where any of the others were. The 1922 Contractor item was about the contract being let for a new theater at 640-646 Braddock Avenue for the Crystal Amusement Company. If that project was completed it might have been the Braddock, Grand, or Colonial.

The Capitol sometimes advertised what was showing in the neighborhood listings in The Pittsburgh Press. The latest one that I could find was the week of October 26, 1966 – a double bill of “Marco the Magnificent” and “Tiko and the Shark” is listed…so the Capitol was still open then.

Does anyone know where I can find microfilms of old Braddock papers, if any exist? I tried the Braddock Carnegie Library, but they do not have them.

The Crystal Theater in Braddock opened in 1908. In the mid 1920’s it was fully renovated and re-opened as Braddock’s original Capitol Theater in 1928. It seated 1571 people. It was a majestic marble laden structure with an expansive balcony. It was located at 838-844 Braddock Avenue. Both the Capitol and the Times in Braddock were owned and managed by Crystal Entertainment, which I assume, was just a carry over name from the origial days of the Crystal Theater.

The Grand Theater was one of Braddock’s first Theaters….in fact it may have been the first It is doubtful film of any kind was shown there. It was more likely a burlesque theater. It was located on the corner of Braddock Avenue and John Street. It vacated in the early 1900’s for the building retail store giant of its time “Nugents department Store.”

I have not yet officially found an exact location of the Family Theater but I have found references in the early 1900’s for land being purchased for the building of a theater on the south side of Braddock Avenue between 8th and 9th Street and ironically that is the location of the original Times. Perhaps and likely the Family and the Times were the same location. The Times opened around 1938 or so. The Family Theater burned down in 1930….and it was around the corner from George Street from the fire references and that is exactly where the Times was located. The Times closed in an around 1953-54 and the Capitol mentioned above moved here around 1957. The address is approximately 867-69 Braddock Aveneue or so.

The Knickerbocker did exist but I have never found a location other than it being on Braddock Avenue.

Another note. There is not now, nor was there ever a 1600 block in Braddock so the American could not have been at 1616. But remember Braddock Avenue travels through many boroughs so it could have been in Turtle Creek or Regent Square.

Also I have never heard any references to the Braddock Theater in all my research of Braddock. Now I have something else to look for. Drat.

I remember when I lived in Braddock in about 1959 or 1960 up on Price Ave, the school was still up there, an elementary school I think. I went to the Capital Theater on a late afternoon by myself to see two spooky movies, when I came out it was dark out. I was so scared of walking home by myself but I didn,t have much choice. Remember, these where the old days before cell phones and I didn,t have any money for a pay phone. I probably ran most of the way home and was so glad to get home. From then on I made sure I only went to the show with someone else with me or around noon. I know there probably where other theaters in Braddock at the time but the Capital was the only show I remember.