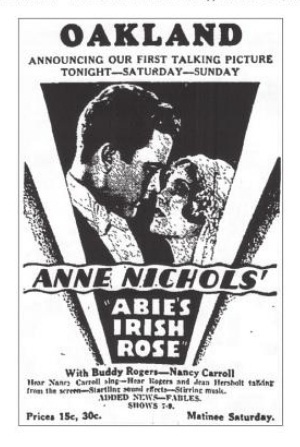 Located at the corner of Davids Street and Bellefontaine Street. The Oakland Theatre opened in October 1922. It was remodelled in 1928 and at that time a Kilgen Organ, Style U05, Opus 4167B,(2 manuals / 3 Ranks) was installed at the cost of $1,960.00. The Oakland Theatre was closed when it went into receivership in 1929. From 1931 to 1933 it operated as live theatre known as the Mimes Playhouse.

First in 1922 a 2 manual/? rank Kimball Pipe Organ was installed in the Oakland Theater. Wonder why it was replaced after only 6 years with the Kilgen Pipe Organ! Anyone know what happened to either organ?

Need an address, more info and photos are always welcome.

The Oakland Theatre Building was architected by Fred D. Jacobs and completed with its grand opening in October of 1922 and named after the Oakland Height neighborhood in Marion. Eight operators would find out the hard way that neighborhood theater operation was tough sledding in Marion as the theater seemed closed as much as opened in a checkered 26 years of service. Though the theater’s address was at 764 Davids in the Oakland Heights neighborhood, the mixed retail/residential building had numerous addresses containing apartments on the second floor and a number of businesses on the main floor. It was described as a superstructure taking up an entire block at Belafontaine Ave. and Davids. The 400-seat theater appears to initially be under the ownership of the Marion Photo-Play Company which operated the Marion, Grand and Orpheum at some point. The Oakland shut down in the summers in its formative years. Benefit screenings and lectures were part of the theater’s apparently unsuccessful run.

Marion’s movie industry goes into financial tumult in the late 1920s. The Oakland Theatre closed and, in 1928, new owner Reuben Maxson who had three theaters in Celina signed a ten-year lease and arranged for an extensive $15,000 remodeling of the Oakland which included a Japanese tea room, the neighboring New Oakland Sweet Shop silver screen, upholstered seats and an electric Kilgen & Son Wonder Organ with hundreds of pipes to be played by Dorothy Wilson of WAIU radio. On May 28, 1928, the rebranded “New Oakland” launched with “The Gaucho.” The theater struggled and went into receivership though sold to W.C. Barry of Marion in early October of 1928. Maxson’s remaining two Celina theaters were closed as a result of the deal and the Sweet Shop was cut loose from the Oakland’s operation. The theater was rebranded as “The Oakland Theatre.” Two weeks later the Marion Photo-Play company closed the Marion and had to sell off its two remaining theaters, the Grand and Orpheum. The owner, John J. Huebner, would re-open the Marion later. The Oakland was retrofitted for sound showing “Abie’s Irish Rose” on July 19, 1929. Following the January 20, 1930 shows, the Oakland closes.

From 1931-1933, a news article states that the Oakland becomes the Mimes Playhouse presenting live stage plays before moving onward. On April 12, 1936, Harry A. Galenes the Oakland Theatre with “The Mighty Barnum” and “Air Hawks.” Soon after, the Oakland closed again. Then on August 14, 1936, the theater reopened with A. Milo DeHaven formerly of the Charkeres Theater Circuit. The theater’s re-re-re-re-opening film was Jack Benny’s “It’s in the Air.” The theater closes and reopens late in September of 1936 with “Mr. Deeds Goes to Town.” The theater closes again and under its sixth owner, E.A. Ballou is rebranded as “The Oak” opening with “The Roaring Twenties” on Feb. 29, 1940. That appears to last about one month.

The theater opened again in April of 1948 under owner C.E. Harvey who renamed it the Joy Theater. The theater went from 400 to 348 seats in the redesign. “Red Stallion” launched the Joy on April 14, 1948. But there was little joy for the Joy and the theater closed. The Oakland/Joy became a church identified as within the Oakland Theater Building until 1957. (So the entry can definitely stay as the Oakland Theater.) Foursquare Gospel is in the building until 1953 and Christ Gospel appears to be in the space until 1957. No further businesses listings, theatrical bookings or services appear at the location after that date.