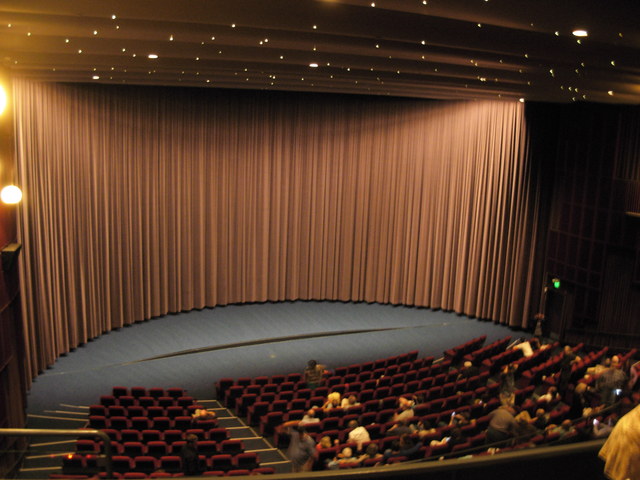 Seattle’s Martin Cinerama opened in 1963 using the original Cinerama 3-strip projection technique. But with a shift underway towards 70mm projection, the theatre was altered just a few months later, although the enormous curved screen was kept. It had a capacity of 808 seats.

The 70mm Cinerama screenings lasted until 1969, when the theatre switched to more conventional 35mm projectors. Eventually Cineplex Odeon took over operations. By 1997, the theatre was struggling and developers swooped in with plans to repurpose the theatre.

Very quickly, Seattle Cinerama lovers began a grassroots effort to save the theatre. A year later, Paul Allen (of Microsoft fame), bought the theatre for $3 million. Soon after, he orchestrated an immense restoration project that enhanced the theatre’s appearance and returned it to its roots—showing films in the Cinerama format.

Re-opened in 1999, the Seattle Cinerama Theater is now one of only three operating Cinerama theatres in the world. This beautifully restored shrine to Cinerama is now one of the most technologically advanced movie theatres ever erected. In the Fall of 2014 it was closed for remodelling, reopening in November 2014 with a reduced seating capacity of 570.

After philanthropist Paul Allen’s death in 2018, in early-February 2020, it was closed for ‘refurbishment’ but in May 2020 it was announced that it would be closed for the “foreseeable future” and may not reopen, so the future of one of the world’s greatest single screen showcases is again uncertain.

Sounds like the Cinerama is going the way of the late UA 150. They were the last Seattle theatres with deep-curved screens. The Blue Mouse was long gone when I lived in Seattle and it may have had a deep-curved screen, ditto the Paramount during its Cinerama phase. Now Seattle will be like everywhere else, a nation of flat screen multiplex exhibitors.

This is unfortunate, but not unexpected given today’s pandemic. I suppose another philanthropist needs to step in and take over. Probably would need to be a Hollywood type individual who appreciates the film experience. Page Steven Spielberg and/or George Lucas, please. :) Or both of them. How about programming on during the weekends/week of exclusive screenings of their films? Maybe do the original un-tweaked Star Wars one weekend..CE3K original edition the next? Yeah..yeah.. Disney owns Lucasfilm now. Its just an idea.

So Paul Allen’s estate is f-cking up this theater?

Giving up the Seattle Cinerama leaves only a single Cinerama equipped theatre in the US, namely the Cinerama Dome in LA which has such a steep projection angle the screen is tilted. I find that decreases the Cinerama experience, which probably means a complete loss of the process in the near future. Transferring 3 individual 35mm images to a single 70mm frame will preserve the Cinerama releases, but does not replicate the original experience. I hope the original triple reels will be turned over to the Library of Congress film restoration and preservation division.

Absolutely true: the Cinerama Dome in LA was designed to present 70mm single projector “Cinerama”. Stanley Kramer, director of the opening feature Mad Mad Mad World, stated “It’s not Cinerama.” The screen in the Cinerama dome is not louvered but is deeply curved and somehow manages not to wash out the projected image, perhaps using lenticular technology. Despite its large size I did not find it entirely successful at “putting you in the picture” even with the two projectors later added to present three strip Cinerama. This makes losing the Seattle Cinerama an even greater tragedy.

I’m glad I got to live here in Seattle while it was open, since I moved here in 2013. I never saw anything on the deep curved Cinerama screen (afaik still installed behind the modern, less-curved screen), but I’m grateful for all of the films I got to see there, including 2001. I hope someone steps in to rescue it.

Who is it that will actually decide the fate of the Seattle Cinerama? The city of Chicago purchased the iconic Chicago Theatre to save it.

Based on what I am able to obtain from different online news sources, it appears Vulcan Inc., owned by the late Paul Allen attempted to renovate the theater (fix wear and tear items and adjust the concession menu..no disclosed tech changes) but stopped in Feb. Now Vulcan puts out a statement that the venue remains closed for the forseeable future and has shut down its arts & entertainment division.

The speculation now is Amazon may be interested in the venue for its own venture into the entertainment business as Netflix has bought the Egyptian in Hollywood. Sounds sensible, if this all turns out to be true.

I can’t imagine anyone dismantling what is in place now, including the 3 strip projection set up. Its just crazy. On the other hand, DC’s Uptown had a 3 strip set up way back when..and it is now currently vacant. Bezos, who has a large presence in DC owning the Washington Post and opening up a campus in Arlington VA, could take over that venue. The 3 strip set up could be transferred there and DC could have show Cinerama. Okay, that last part is my fantasy projection.

Here’s the link to a newly-published 70mm playdate chronology for the Seattle region which, of course, includes numerous mentions of the Cinerama Theater.