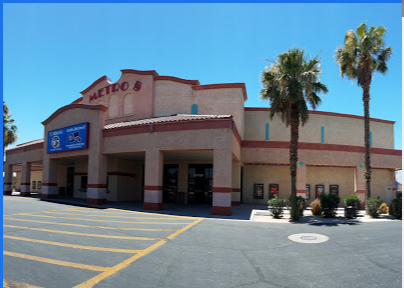 Indio is located at the far reaches of the Coachella Valley, about 23 miles east of Palm Springs and the Metro 8 seemed at one time to be the orphan of the area’s theatres. According to various news articles from the Riverside Press-Enterprise, it has had four operators over the years. Metropolitan Theatres first opened it February 9, 1996. By 1999 it was under the control of Resort Theatres of America (RTA), who went bankrupt in 2000. RTA, who before 2000 controlled all of the first-run screens in the Valley, based their business model on opening theatres near resort destinations. By 2003 the Metro 8 was being operated by Signature Theatres but in 2004 it became a part of Regal Entertainment Group. The closest competition would be the Cinemark At The River or the Regal 16, both in Rancho Mirage, about 11 miles west. Considering the price of gasoline, Indio residents may want to stay in Indio for their movies.

It was closed on October 8, 2020. It was taken over by Regency Theatre in 2021 and following a renovations it is set to reopen in Summer of 2022 as Regency Festival Cinemas.

This opened on February 9th, 1996. The grand opening ad can be found in the photo section.