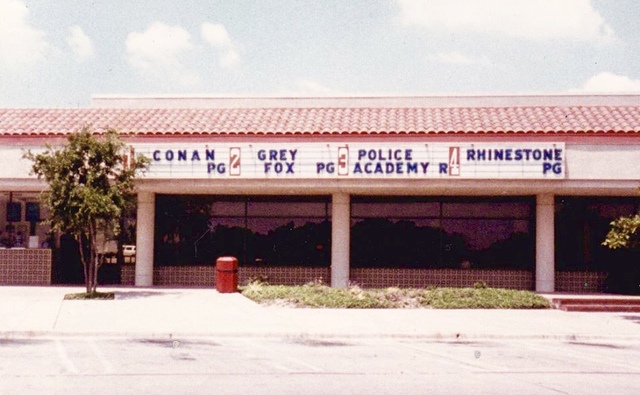 The building has been remodeled several times, and became an El Fenix Mexican restaurant.

This theatre opened at Christmas 1979; it was a typical of it’s time General Cinema tin-walled cracker-box style. It had a Dolby Stereo theatre but because these theatres were all long, the Dolby Stereo was pretty pathetic! Only the rows in the direct middle of the theatre could get a good stereo effect. Sit too close to the screen and no surround effect; sit too far back and too much surround! General Cinema; from sixties interest to seventies patheticism to eighties/nineties adequacy. R.I.P.!

This theatre building is still there but has been remodeled out-of-existence a number of times.

When the Sakowitz department store chain moved to Dallas, it was big news. The Sakowitz Village was created at Belt Line Road and the Dallas Parkway and in 1979, General Cinema wanted to be near the action. The chain leased a 15,000 square foot space adjoining Montfort Rd. in creating the GCC Prestonwood Cinema IV. The theater was architected by Ralph Kelman opening December 14, 1979 and had four very narrow and exceedingly long auditoriums that were likely to be originally designed – though never built – as a twin-screen facility. So unsatisfactory the experience that in 1981, the theater company announced plans to add a single “Northpark III & IV” styled-auditorium as its “A” screen. That never occurred as the chain decided to turn its attention to its Galleria space acquired in 1981 and opened in 1982.

When Sakowitz filed for bankruptcy in 1985, it took less than a year for the Sakowitz Village concept to fail as the department store left Dallas. The building in the renamed Village on the Parkway stayed empty for many years casting a pall on the shopping center and General Cinemas would relegate its Prestonwood (and for a very brief period the theater was advertised as the GCC Montfort and the GCC Prestonwood Village) to discount status. With competition from the nearby AMC Prestonwood 5 and even closer United Artists Prestonwood 5, the move was a last ditch effort to keep the lights on. There’s not much doubt that GCC was trying to eke out as much money as it could from what appears to be a 20-year lease on the Prestonwood IV. Mixing in some special interest films and foreign language films (including a regular Hong Kong series) with second-run Hollywood fare, the theater limped toward its ending August 20, 1998. The decision was made because the theater was no longer “as profitable or as competitive as they had been when they first opened,” said Brian Callaghan, a spokesperson for GCC at that time.

After being vacant for over three years, the theater’s floor was leveled as part of a $1 million makeover to be used for retail and restaurant space. “We realized that the movie theater business was in a shake-up and we wouldn’t be able to lease it to another theater,” Dunhill Partner’s William Hutchinson said of his firm’s property. But sixteen years after the closing the Montfort theater, the AMC Village on the Parkway 9 would open just about 100 yards from the former GCC Prestonwood IV bringing films back to the former Sakowitz Village… only with much better sound and picture.

I was a doorman/box-office/concessionaire here for a while during high school. I worked in this theater until 1982 when Dalts was just around the corner. ‘ET’ was a nightmare here – the crowds were miserable with the very compressed front lobby and very poorly laid out screen entrances. Pink Floyd’s ‘The Wall’ and ‘Heavy Metal’ both showing nearly the same time was a nightmare of another type. Spent far too many Saturdays upstairs in the popcorn room just behind the projectors to count.