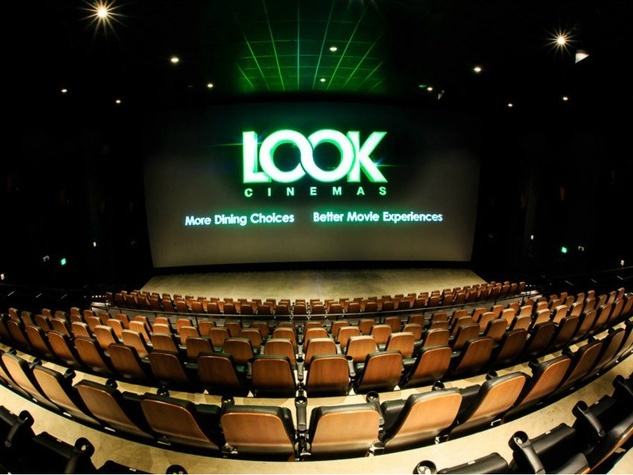 The 11-screen, 1,900-seat LOOK Cinemas, designed by Tony Pleskow, opened on March 29, 2013. The $17 million complex was built on the site of the demolished Granada Studio Movie Grill in the far north Dallas district of Addison.

The three partners in the enterprise, Tom Stephenson, Brian Mason and Joseph Palladino, designed the cinema with four types of moviegoers in mind: (1) LOOK and Dine for full service cuisine, (2) The Loft for the over 21 crowd and lighter fare, (3) Evolution for their largest screen with enhanced projection and sound, and (4) General Admission for those who just want to see a movie.

LOOK Cinemas website notes the varied background of its founding members. Mr. Stephenson was previously President and Chief Executive Officer of Rave Motion Pictures. Mr. Mason is an accomplished entrepreneur in many enterprises, including digital media, and advertising. Mr. Palladino is a co-owner of Nick & Sam’s Steak House and creator of various dining concepts.

The LOOK Cinemas was closed on March 16 due to the Covid-19 Pandemic. It was announced on June 29, 2020 that the closure would be permanent. It was taken over by the EVO Entertainment Group to reopen in 2022.

Saw 70MM Dunkirk on 7/29/17. Amazing presentation. The theatre itself is very nice. Leather recliners all around and 2 onsite restaurants. Concessions and tickets are way overpriced for Dallas. But it’s a good theatre.

The Look Cinemas closed due to the COVID-19 pandemic on March 16, 2020. In April and May, it offered concession sales and virtual cinema to try and stay afloat. But on June 29, 2020, the independent theatre made the closure permanent also closing its Ivy Kitchen. The theatre had Dolby Atmos capability and was one of the area’s few cinemas still able to present 70mm films. It was a significant loss to the presentation of films in the marketplace.

The LOOK Cinemas is currently being renovated and will be known as EVO Cinemas | Prestonwood later in 2022.