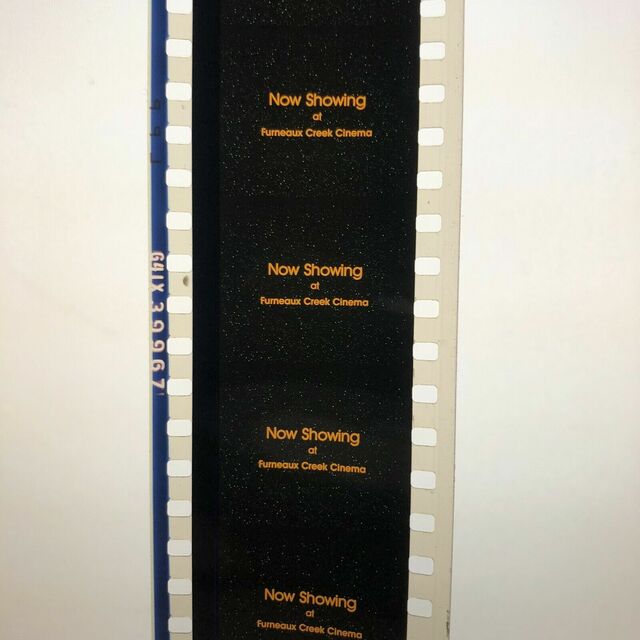 This typically boxy General Cinema six-plex was opened on July 24, 1987. It closed in September 1998 when General Cinema went out of business. A few years later the building was used as a Bally’s Fitness Center, but that has also closed.

I grew up in Carrollton in the 1980s and 1990s and this was one of my two hometown multiplexes. Curiously, General Cinema opened this one just a few years after building the (larger and IMHO nicer) Furneaux Creek 6 across the street, which isn’t yet listed on this site.

The Carrollton 6 always felt smaller and cheaper, and was located weirdly at the rear of a shopping center – kind of difficult to see as you went by. It was a very typical GCC property on the inside, with low-ish ceilings, minimal decor and perennially sticky floors.

I remember having my tenth birthday party here in 1991 and the theater providing free popcorn and drink refills as part of the party package. We saw “Ernest Scared Stupid.”

In 1983, the fast-gowing Dallas suburb of Carrollton had just surpassed 50,000 citizens and projected to exclipse 80,000 by 1990. In 1970, it had just 13,855 people and was served by a twin-screen drive-in, the Rebel, and an old downtown movie theater, the Plaza. In Carrollton’s growth spurt, the Trinity Mills / Old Denton Road would receive an astonishing 21 movie screens. It would start with General Cinema’s Furneaux Creek Village 7. That would prove so successful that the firm would plop down another theater caddy corner to the Furneaux called the GCC Carrollton Towne Centre 6 – generally known simply as the GCC Carrollton 6. And Cinemark would create its Movies 8 at Trinity Mills positioning it as a sub-run discount house.

Starting with Furneaux Creek, developer Paul Broadhead announced the $12 million Furneaux Creek Village late in 1982. General Cinema Corp. and three restaurants were first announced with the GCC Furneaux Creek Cinemas 7 launching on December 9, 1983. The theater was at 2625 Old Denton Rd. It opened with Yentl, Christine, Sudden Impact, Never Say Never Again, and a Smurfs film. Despite limited street visibility, the theater was an immediate hit as people loved the dining and shopping alternatives including book store in the cozy Furneaux Creek. The shopping center had a subdued architectural feel and the GCC cinema used understated and dark color palette creating a calm and abnormally darker than average lobby environment. GCC would use its business strategy to plop down another multiplex where one was doing brisk business. It had done this at the Town East Mall in Mesquite, Northpak Center and Redbird Mall in the DFW area.

Caddy corner to Furneaux Creek Village, a 182,000 square foot, non-descript shopping strip called Carrollton Towne Centre was announced in 1986. GCC would take a well-hidden 25,175 square foot spot tucked away in the back of that strip. The theater was brighter than its neighbor. That said, the arcitecturally-bland Carrollton 6 matched the benign shopping center launching July 24, 1987. The theater had mediocre sound options and wasn’t a destination theater by any stretch. But GCC had tight control of the Carrollton zone with its 13 screens caddy corner from one another. Success was rather short-lived.

Furneaux Creek’s creator Broadhead had now moved on to chairman of upstart movie circuit, Cinemark. He and LeRoy Mitchell made what they called a “risky move” by encroaching on the Carrollton zone. In 1989, the three-year old circuit decided to launch an 8-screen subrub discount house walking distance from the Furneaux Creek shopping center at 1130 W. Trinity Mills Rd. The city had gone from one screen in 1983 to 21 screens when the Cinemark opened Nov. 10, 1989. And the risk was possibly too great as all three theaters would fall on very hard times fairly quickly.

Just to the North in Lewisville, less than five miles away on Interstate 35, a retail nexus would form around the Vista Ridge Mall – the DFW area’s newest and largest mall which opened in October of 1989. It included a 12-screen first-run Cinemark theater as multiplexes were giving way to megaplexes of ten or more screens. Within five years, the Lewisville zone would have 30 first-run screens and one discount house. The better-built megaplex-era theaters would erode film audiences from the multiplex-era Carrollton theaters. Also, population shifts in the 1990s saw a surge in Asian residents and the marketplace would alter Furneaux Creek’s target demographic. In short, the three Carrollton theaters would all be at the wrong place at the wrong time each failing to reach the end of their original lease periods.

The GCC Carrollton was the first casualty closing in September of 1998 as GCC focused on its Furneaux Creek operation. The GCC Carrollton would have the distinction of showing “Simon Birch” as among its last offerings. Birch would close the iconic General Cinema NorthPark I theater less than a month later. Things weren’t any better for Cinemark as it closed up shop at its Movies 8 in July of 2000, a rare misstep for the firm. And the third and final theater in the Carrollton zone would drop just three months later.

GCC was doomed with its multiplex-centric business model. The GCC Furneaux Creek got a vote of confidence on October 5, 2000 when four GCCs were shuttered leaving just the Galleria, the Furneaux, and the newly-built Irving Mall 14 in the DFW area. Two weeks later, GCC rethought the plan and closed the Galleria and Furneaux Creek. The last show was “Bait” with no patrons for the other six shows as the theater closed quickly and quietly before the evening’s posted showtimes could run.

It was hard to imagine that the Carrollton zone had gone down so quickly. Star Cinema took on the Furneaux Creek very briefly openning in November of 2000 with Little Nicky and six other features. But that operation closed quickly as Star Cinema moved to the former GCC Town East and then, finally, to the former AMC Towne Crossing before surrendering to the megaplex era. A hastily-created Cinema Grill by a fledgling circuit of the same name came into the Furneaux Creek basically removing rows of seats to put in tables for full-kitchen service movies with meals. That launched May 8, 2002 but was a quick failure.

The Movies 8 became a non-profit Covenant Church. The Furneaux Creek was completely gutted revealing just a giant hand-painted General Cinema logo on its back wall. It was converted into a vibrant Korean market. And this listing for the GCC Carrollton Towne Center was home to a gym which failed. The former Carrollton 6 was vacant for long stretches prior to and after being a gym, in part, due to the hidden nature of the building.

I Just Found Something But The Furneaux Creek 6 Needs His Own CinemaTreasures Page Soon.

2528 Old Denton Road #150 is now home to City Night KTV Karaoke Bar & Café. And the Furneaux Creek finally regains its own page - albeit more than 10 months after the request. Sorry!