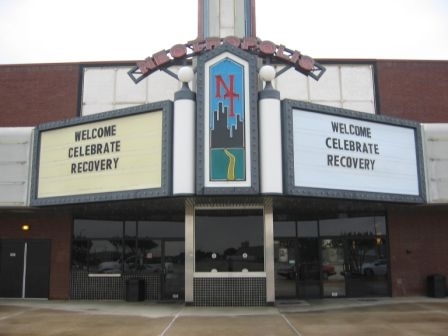 This 8-screen Cinemark theater was opened on December 16, 1989. It was closed in 2000. It was then sold to a church that used it for youth activities. It had a “For Sale” sign posted in front of it for several years.

It was reopened December 2015 as Cinema Oasis in four of the screens, showing Asian movies. The other four screens are used by a language school, arts space and café. In fall of 2017 it was renamed Bluebonnet Cinema. It was closed on January 5, 2019.

I drove by this theater today and it is now occupied by MediaTech.edu, a video and music technology school.

Cinemark built this one in the late 1980s as a dollar-run theater. It never showed first-run films. General Cinema had two properties within a half-mile (the Furneaux Creek and Carrollton 6 theaters) and this was Cinemark’s attempt to have some kind of presence in Carrollton.

The planned Loop 9 freeway was scheduled to run right past this theater, but construction was repeatedly delayed (it finally opened as the George Bush Turnpike in 2001) and moviegoers began deserting the Carrollton multiplexes for the larger megaplexes in Lewisville and Plano. It became “Neotropolis,” a youth center run by Carrollton’s Covenant Church, in 2000.

I saw many dollar films here as a kid and the layout was pretty straightforward – three auditoriums on each side, two in the rear, and a concession stand in the middle. The lobby was done up in garish late 1980s neon colors (which seemed so fresh and modern back then!)

In 1999, just after graduating from high school, I saw “Analyze This” at this theater. There were only a handful of other customers in the auditorium and it was obvious the property was on its last legs.

This Cinemark discount cinema opened on December 16, 1989. It closed after ten years of operation, it became the Covenant Church in 2000 before a period of inactivity.

The Movies 8 neighborhood and its neighboring shopping centers once home to two General Cinema 6-plexes became Korean-centric as Carrollton became a top 15 medium market population center for Korean Americans with 1.3% population as Korean. So a new group took on the former Cinemark theater. It relaunched splitting the operation of the building to part theatrical and Korean activity center under the name of the Oasis Cinema. The Oasis played contemporary Asian films with Korean and Chinese language films in two auditoriums. The Oasis also played major Hollywood releases with Korean subtitles. The Oasis closed briefly and relaunched In the Fall of 2017 changing names / operators to the Bluebonnet Cinema still showing contemporary Korean films. It closed on January 5, 2019 with a hopeful reopening soon that never came.