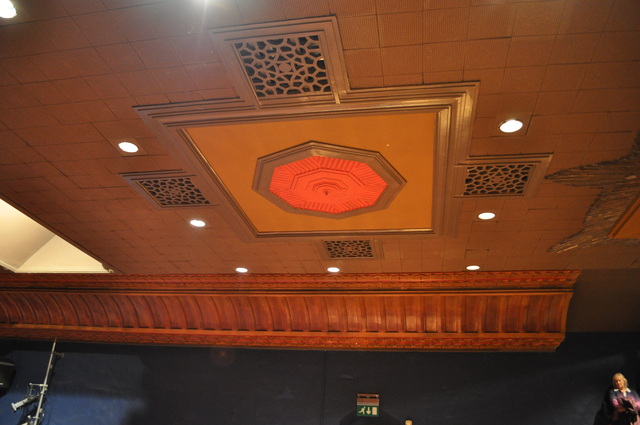 Built in 1866 as the Town Hall and Corn Exchange. It was converted into a cinema, opening on 14th March 1921, with seating provided for 450 in the stalls and 200 in the circle. The proscenium was 21 feet wide, the stage 16 feet deeps and there were six dressing rooms. The building also contained a cafe & ballroom, located in the former corn exchange part of the building.

The interior of the cinema was destroyed by fire on 9th February 1931. It was rebuilt and re-opened on 29th June 1931.

The Queen’s Hall closed as a cinema on 4th May 1961. It was converted into a Baileys Bingo Club. The entire building was closed in the early-1970’s and deteriorated badly.

Purchased by the County Council in 1976, work began to renovate the building in 1977. A library was opened in the former corn exchange/ballroom in 1979. In 1982, work began on restoration of the former cinema. Now seating 350, it re-opened on 23rd October 1983. The side-walls were stripped back to bare brick and painted, but the ceiling was restored, and a deeper stage installed. Mainly used for live theatre performances, there is a local film club which screens DVD movies once a month.

Some photo’s from the 1990’s of the Queens Hall