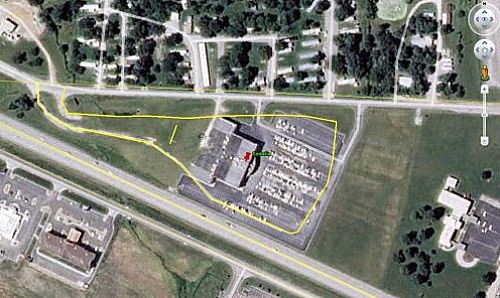 The 50 Highway Drive-In was operated by Commonwealth Amusement, opening on April 29, 1949 with Dennis Morgan in “Two Guys from Texas”. They were still operating it in 1955, with the name shortened to 50 Drive-In. It was closed on May 12, 1980 when it was hit by a tornado.

Tp is correct. The drive-in at 4104 W. Main Street closed as the Sedalia Drive-In. According to Drive-Ins.com, it opened in 1949 as the 50 Hi-Way Drive-In, became simply the 50 Drive-In in 1955, was closed following a destruction tornado in 1976, and was reopened in 1990 as the Sedalia Drive-In. It has since been demolished and its site is now the location of the indoor Galaxy 10 Cinema, which was built as an 8-screen house in 1998.

CinemaTour lists the Starzz Drive-In on Whitfield Road as the Diamond Drive-In, with Starzz as an aka. Adam Martin posted photos of it.

Web sites recording major weather events in the area don’t list any tornadoes at Sedalia in 1976, but they do list the one in 1980. The site of the Sedalia Drive-In was probably vacant from 1980 until the Galaxy 8 was built on it in 1998.

It looks there are some remains of the entrance and exit roads still there(behind Galaxy 8) in the above photo.

I don’t think this drive-in was ever called anything except the 50 Highway or some variant.

The “50 Drive-In” advertised in the Sedalia Democrat in July 1979 and early May 1980. News reports of the May 12, 1980 tornado said it obliterated the “Highway 50 Drive-In Theater”. (Commonwealth Theaters reopened the indoor Fox in June while promising to have the “New 50” ready for the 1981 season.)

Opened On April 29, 1949 With “Two Guys From Texas” Along With 2 Unnamed Bugs Bunny And Tom And Jerry Cartoons.