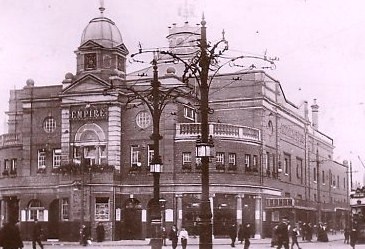 Located on Higher Ardwick at the corner of Hyde Road, Ardwick Green, to the south of Manchester city centre. The Ardwick Empire Theatre was built as a large variety theatre for Oswald Stoll, and opened on 18th July 1904 with a variety bill topped by Fred Karno and Company in a sketch entitled ‘Saturday to Monday’. The opening night also featured animated pictures on the Bioscope.

It was another magnificent theatre, designed by noted theatre architect Frank Matcham, with interior decorations by De Jonge & Company of London. Seating was provided in orchestra stalls, grand tier and balcony levels, as well as numerous boxes. The theatre was capable of presenting water spectacles. Stars who appeared on the stage in the early years include Dan Leno, Charlie Chaplin. Buster Keaton & Harry Lauder. In 1930, it became a cinema, but also presented variety acts on its stage.

In 1935, Stoll’s Manchester Hippodrome Theatre in the city centre on Oxford Street had been sold to the Granada Theatres cinema chain, and was demolished to build a new super cinema (which was taken over by Gaumont British just prior to opening and opened as the Gaumont Manchester). The Ardwick Empire Theatre was refurbished and became Stoll’s main variety theatre in the city, and was re-named New Manchester Hippodrome Theatre. Top stars such as Larry Adler, Max Wall and Joe Loss & His Band appeared on the stage. Popular musicals such as “The White Horse Inn”, “Desert Song” and “The Student Prince” were staged.

The New Hippodrome Theatre was closed on 22nd April 1961 after a two weeks run of the revue “Tokyo”. The contents of the theatre were auctioned of in August 1961, and there were plans proposed to convert the building into a ten-pin bowling alley. This never happened, as it was badly damaged by a fire in February 1964, and was demolished in August-November 1964. The site was never built on, and in 2012, remains an empty plot across the road to the left of the famed Apollo Ardwick Theatre.

Picture of this theatre

I wonder if this was the same Hippodrome mentioned in Today in Beatles History.

A wonderful theatre. As a child, I was taken to ‘The Hip’ each year, by my maternal grandmother, to see the Christmas pantomime. I missed it when it closed. The wreckage, following the fire, distressed me and I was happy to see it demolished.

The site is now a car-park surrounded by large advertising hoardings. Ironically, the largest and most prominamt regularly promotes new cinema and theatre shows.