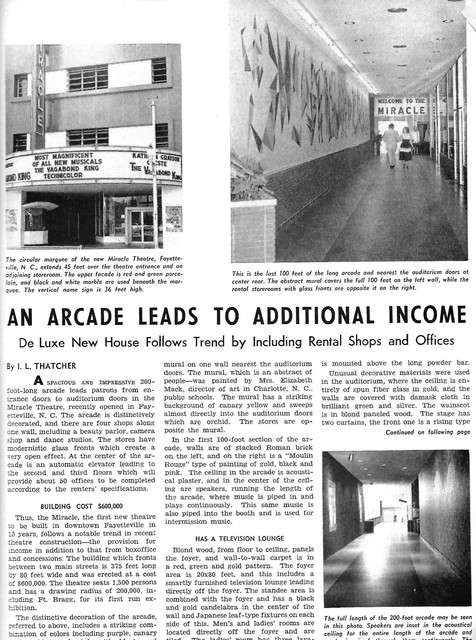 The Miracle Theater was the showplace of the South held it’s grand opening on Tuesday August 14, 1956 with the premiere attraction of “The Eddy Duchin Story” starring Tyrone Power and Kim Novak. This modern 1,500 seat motion picture theater was one of the largest theaters in all of Fayetteville and Cumberland County and Eastern North Carolina that features full stereophonic sound with a four channel sound system. The Miracle Theater was very unique in terms of it’s modern design and was Fayetteville’s largest theater and the biggest in all of downtown and the surrounding areas.

The Miracle Theater upon it’s grand opening had three projectors instead of the usual two for quality viewing that was capable of showing films in the 35mm and 70mm formats with it’s astounding widescreen auditorium. The main lounge of the Miracle Theater was carpeted and furnished with the latest modern design. The stage part was draped with two curtains, one of which rises was designed in rust plush, and the screen curtain opening to the side was of turquoise plush. It was also equipped with a streamlined snack bar, a lounge room, a smoking section, and a reserved section for other activities. There was a also a balcony section that seated 670 while the front section of the cinema seated 830 bringing the total of 1,500 seats.

The Miracle Theater was one of 19 theatres in North Carolina that was owned and operated under H.B. Meiselman Theatres of Charlotte. A lot of great blockbuster movies played at the Miracle Theater and it was that way until the 1970’s when the cinema went to becoming a second-run theatre showing grindhouse films and the like. By the 1980’s, the Miracle Theater became a discount movie house showing second-run films until it’s closing in 1982. It has been demolished.

I am so grateful for this information. I have done so much research on the Miracle Theatre and it’s almost like it didn’t even exist. I was born in Fayetteville in 1959 and remember The Miracle as the premiere theatre. I remember the scolloped curtain rising. I saw Mary Poppins there in 1964 when I was 4 years old and again at a re-release. Most other films I saw were at The Colony. I remember The Colony at that time had a smell…and the carpets were hard from years of walking and snacks being spilled. The Miracle was always pristine. I had forgotten the shops by the side. Thank you, Tinseltoes, for the photo trip down memory lane! I do remember standing outside that box office on the street and walking down that long hall to the theatre.

Rear view of The Miracle:  http://d.lib.ncsu.edu/collections/catalog/bh2193pnc001

The Boxoffice article Tinseltoes linked to earlier says that the Miracle Theatre was designed by the architectural firm of Wooten, Wooten & Crosby.

Not only did “MARY POPPINS” played here but also had the Fayetteville showing of “THE SOUND OF MUSIC” too was given the first-run billing at the Miracle.

Other movies that played here were “AMERICAN GRAFFITI”, “THE STING” among them were first-run at the Miracle.

Cha I grew up in Fayetteville, NC too….I always remember the long walk to the lobby of the Miracle theatre….Huge theatre with a balcony…..Two films in particular come to mind in 1972 (we were 14, my cousin and I took the bus downtown) that we saw….“The Poseidon Adventure and Kansas City Bomber”…Both first run….It grieves me to see they demolished all the downtown theatres!!….Miracle, Colony, Carolina, Broadway, Towne….Classic Americana gone!!…They did a nice job of cleaning downtown up, but they should have kept the theatres for historical value….Those were the days when we took the bus downtown and ate at the Woolworth counter where my Aunt worked!!…America at a better and more innocent time…..

Don’t forget…WFLB radio was also housed in this building.

Strangely enough, the Miracle was listed in the 1961-76 editions of the International Motion Picture Almanac as a drive-in theater. At least the IMPA got that 1500 capacity correct, even though it was seats, not cars.