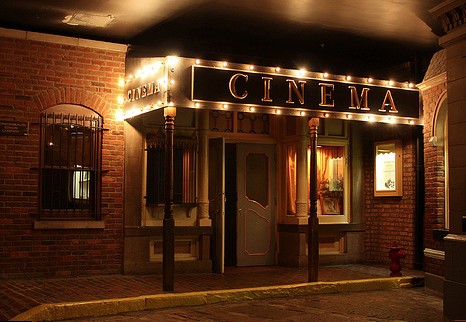 In the Museum of Science and Industry, located on Yesterday’s Main Street is a reconstructed nickelodeon that shows complete silent movies. You can sit there all day and watch old silent movies if you want. They use to charge 5 cents to watch a movie. Now its free with admission to the museum. The theater has been in the museum for as long as the museum been there.

Kenneth Kwilinski; Do you know if this theatre projects the silent films in 16mm or digital projection? I went to this theatre in 1976 and I’m quite certain it was 16mm back then. I have a feeling it’s digital today. Do you know how silent movies are projected in this little theatre?

I visited the museum last year and stopped by the Old Time Street to see the Nickelodeon. They were still showing old silent films. A Chaplin one at the time I was there. I didn’t notice a projector. I believe its digital now. Its possible they are looping a string of films onto a projection screen. They also had piano music playing, coming from speakers. No actual real piano playing. I remember back in the 70’s when they used a projector to show 16mm movies on the screen. I think they had a piano player too. That’s about all I remember on this theater. Now there is a working ice-cream stand near the entrance of the Old Time Street. Good ice-cream!

Stopped by the nickelodeon when visiting the museum in about 1964. The pianist was Litta Burlingame, who had played in silent-era Chicago theaters. She was full of wonderful stories about the early days.

Yes I remember the piano player now. Very knowledgable as I remember. Thanks for verifying that craigmorrisonia.