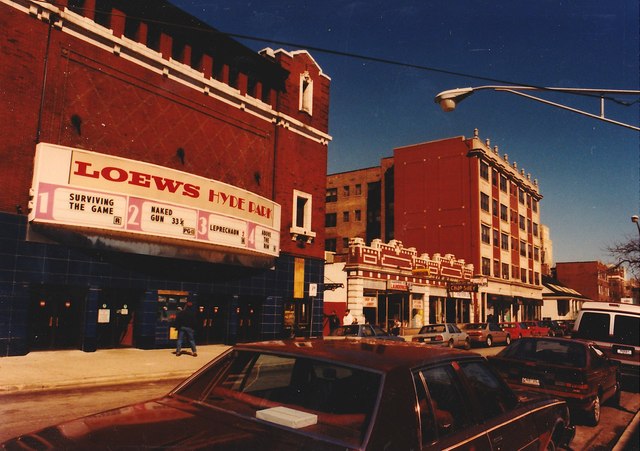 The Harper Theater was built in 1914, but due to a legal dispute it didn’t open until May 24, 1915. This 1,201-seat theater was designed by architects Z. E. Smith and Horatio R. Wilson. It once contained a Kimball organ. In April 1930 it became part of the Schoenstadt circuit. In the late-1930’s it was remodeled by architect Mark D. Kalischer in a Streamline Moderne style.

On December 25, 1970 it became the Hyde Park 2 still a single screen) and still later was increased to four screens. After Schoenstadt, the theater was operated by Kohlberg Theatres, M & R Theatres(from May 24, 1985), Sony Theatres (Loews) in 1989, and finally the Meridian chain. The Hyde Park Theatres closed in spring of 2002.

The theater was renovated in 2011-2012 and reopened on January 18, 2013 under its original Harper Theater name. It still has four screens, but has been completely renovated inside, as well as given a new marquee and vertical sign. The theatre is owned by the University of Chicago, and is operated by the New 400 Theaters, which also manages the New 400 Theaters in Rogers Park. The reopening of the Harper Theater brings movies back to the Hyde Park area for the first time in over a decade.

Their website says they are opening on Friday. Here’s the link: http://www.harpertheater.com

With University of Chicago nearby this could work out well. The old 400 Theater near Loyala U. on the North Side still seems to be doing OK. As far as I know there are no other cinema options around Hyde Park.

Just saw a movie there last Friday. The place is very clean and has a courteous staff. I grew up in Hyde Park and I am glad this venue has re-opened. Hopefully, with the U of C behind it, it will do well and be a positive for the neighborhood.

Mark D. Kalischer, architect for an extensive remodeling of the Harper Theatre in the 1930s, wrote an article about the house for the January 7, 1939, issue of Boxoffice, which has three photos of the Harper in its Streamline Modern configuration:

In addition, another article in the same issue features a couple of small photos of the Harper’s remodeled rest rooms:

Second page (no photos, but additional text for those who only get the magazine for the articles.)

Does a train line run close to this theater?

If so, I remember my dad (may he rest in peace) and I would pass by it on the train when the theater was the Hyde Park in the summer of 1979. (I was working at Michael Reese Hospital in Chicago with my dad that year; that was my first real job as I was 17 then.)

I remember the marquee had comedy and tragedy masks adorning it and before I began my senior year of high school in late August of that year, the Hyde Park was playing the original Star Wars, Episode IV: A New Hope, along with some vintage Tom and Jerry cartoon shorts for the kids. (I saw Star Wars again at the now-demolished Diana in Homewood. To be sure, it had me longing for when I first saw it with my cousin in Pennsylvania two years before, as well as the better times I had in Lansing, Michigan during 1977.)

The first ad as Hyde Park from December 30th, 1933 can be found in the photo section.