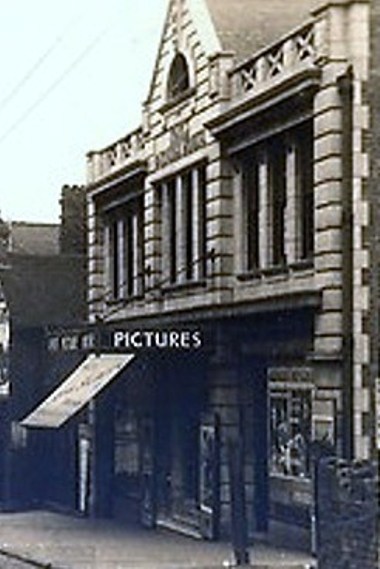 Located in Ilkeston, Derbyshire. The King’s Picture House was opened on 22nd March 1915, and was named King’s after a visit to the town by King George V earlier in the year. It was designed by architect H. Tatham. Seating was provided for 1,199 in the stalls and 175 in the small circle. The auditorium walls were lined with tapestry panels. In 1936 it was modernised to the plans of architect Reginald W.G. Cooper.

The King’s Picture House was equipped with CinemaScope around 1954, and a new 44 feet wide proscenium was built. It was always independently operated and closed on 29th February 1964 with Doris Day in “The Thrill of It All, and was demolished. The Albion Shopping Mall now stands on the site.

King’s Picture House was opened on 22nd March 1915 by the Ilkeston Cinema Company Ltd (owned by local pawnbroker John Brailsford) and deliberately sited across the road from where the rival Globe Picture House was to be built. The architect was H. Tatham of Sudbury. The builders were Bosworth & Lowe of Nottingham. The exterior consisted of a biscuit-colored faience (terra-cotta) with space left for shop and office units. The auditorium measured 86 ft by 50 ft. Interior walls were a rich plaster tinted in blue and gold. The plasterwork was carried out by Lazzerini of Nottingham. Tip-up chairs were supplied by the Buoyant Upholstery Company of Sandiacre. The projection room was located over the lounge and equipped with two projectors. £3000 of alterations were carried out in late 1920 and involved removal of the virtually unused stage and an extension of the auditorium. An organ loft was also created but there is no record of an organ being installed.

On 8th October 1929 it showed an early sound version of “Show Boat” (1929). A Western Electric sound system and Kalee 8 projectors were installed on 27th January 1930. Later sound systems included the Western Electric Wide Range and Western Electric Mirrorphonic. Projectors were regularly updated and included Ernemann V and Westar systems. It closed for several weeks in 1936 for major modernisation overseen by Reginald W. Cooper, a Nottingham architect. The ornate plasterwork was removed and a new proscenium installed. Concealed lighting was introduced on the side walls. Total seating was reduced to 1,340 on account of wider seats and more space between rows. A 44 foot wide CinemaScope screen together with stereophonic sound was installed in 1954.

The building was sold to Town & Country Properties, the cinema’s final screening – “The thrill of it all” (1963) – taking place on 29th February 1964. It was demolished and replaced by The Albion Centre shopping mall.

Although officially known as King’s Picture House, the sign on the front of the building did not have a comma and thus was Kings Picture House.

The postcode for site of the cinema is DE7 8AG.