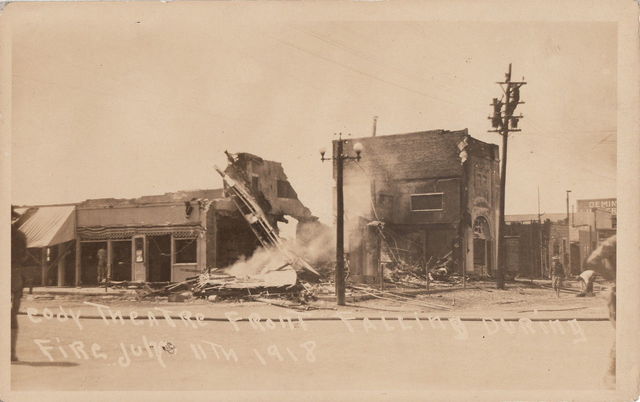 The Cody Theatre was located at the corner of N. Gold Avenue and W. Pine Street. It was a movies & vaudeville theatre, and was said to have been a beautiful building with good acoustics and carpeted aisles, with prices a little higher than other theatres in town. The Cody Theatre was opened December 15, 1917. It burnt down in July 1918.

The Cody Theatre was named for Camp Cody, a U.S. Army base about three miles from Deming. Originally called Camp Brooks, it was established in 1916 as a base for troops dealing with raids made on the region by Mexican Revolutionary Pancho Villa, and as a base for incursions into Mexico by U.S. forces. On the entry of the United States into the European war in 1917, it was greatly expanded for use as a training camp.

Briefly renamed Camp Deming, it was finally named Camp Cody in honor of William F. “Buffalo Bill” Cody, who died in 1917. The camp remained in full operation until the early months of 1919, and at its peak housed as many as 30,000 troops. This led to an explosion of theaters in Deming, the nearest settlement of good size, and the Cody Theatre was only one of several large theaters opened there in 1917 and 1918. Once the camp began closing down, most the theaters did as well, and by 1926 the only theater listed at Deming in The Film Daily Yearbook was the Princess.

The destruction of the Cody Theatre by fire is shown in several photos on this web page. Report from The Deming Headlight of July 12, 1918.