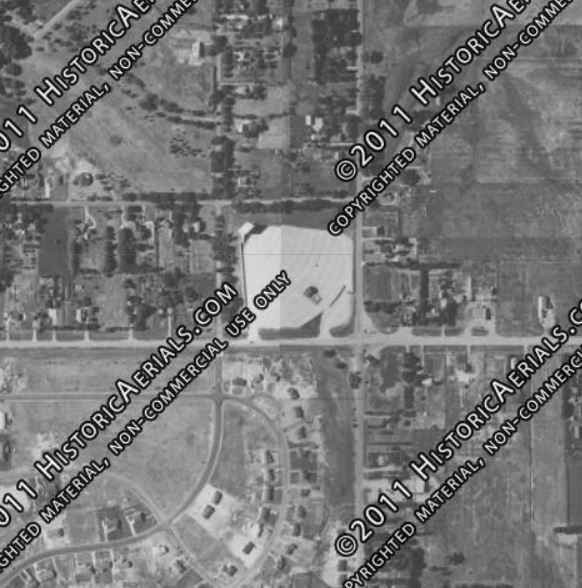 The Ayr-Vu Drive-In opened on July 27, 1949, featuring 1946 comedy “The Return of October” with Glenn Ford, Terry Moore and James Gleason. It was built and operated by Jay Wooten, Fred Moden and Charles Embick dba Wooten Theatres. Jay Wooten was a well-known name in the theatre circles in Kansas. Jay Wooten and Charles Embick theatre manager, held a contest to choose the new name for the drive-in theatre. Out of a thousand entries, Mrs. Sam Stanberry from Wichita, Kansas, was the chosen the winner. Her entry was the “Ayr-Vu Drive-In”.

Wooten closed the Ayr-Vu Drive-In on July 31, 1972. This allowed the property to be redeveloped into the Alco Shopping Center which included a new indoor twin screen theatre. The new theatre was named the Cinema Twin and it was built by Wooten and Commonwealth Theatres. Wooten wanted to close the Ayr-Vu Drive-In with the movie “The Last Picture Show” but the scheduling did not work out. Instead he chose to screen “The Graduate”. Wooten was quoted as saying “The Graduate" is almost as fitting.”.

The grand opening says 30th and Plum St. It is better if you can to use cross streets with Goggle maps. They are off sometimes..

Please update with the address I previously gave. The 1950 points directly to this location.

Is this the only drive-in in the World to have a two story concession stand/projection booth?