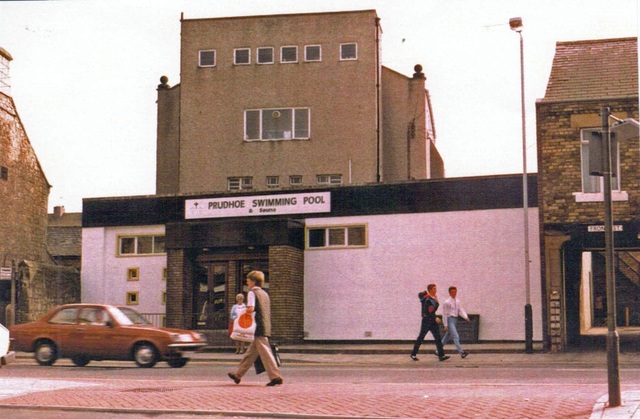 Located in Prudhoe-on-Tyne, Northumberland, on Front Street on the opposite side and further along from the Co-Op. The former Drill Hall became the Drill Hall Cinema in 1910. In 1912 it was re-named Electric Theatre. It had a 22 feet wide proscenium and a small stage.

In 1929 the façade was modernised and a British Talking Pictures(BTP) sound system was installed. The Electric Theatre was closed in May 1939 with Flora Robson in “Fire Over England”. It was re-opened some-time during World War II.

In 1945 under new owners it was re-named Rex Cinema, and a RCA sound system was installed. CinemaScope was installed in 1955, but the Rex Cinema was closed by 1960. In the early 1960’s it was converted into a swimming baths. This closed in 1994/1995 when the new Water-World opened further along Front Street. The front of the building is now used for several retail units, while the auditorium has been demolished and a nursing home built on the site.