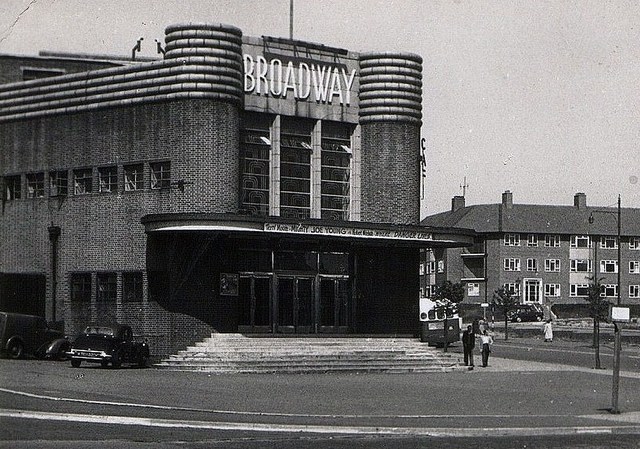 Located in Meir, to the east of Longton in the ‘Potteries’, Staffordshire. The Broadway Cinema was a ‘Super Cinema’ which opened on 14th December 1936 with Anna Neagle in “Limelight” and Charles Bickford in “Java Seas”. It had a 38 feet wide proscenium and was equipped with a Western Electric(WE) sound system. There was a café located in the circle foyer which had a decorative frieze of cartoon characters (a clown, Micky & Minnie Mouse & Pluto) by artist H. Tittsener.

Always independently operated, the Broadway Cinema was taken over by the Blackpool based Tudor Bingo Clubs chain by 1968 and they closed the cinema on 19th June 1971 with James Fox & Mick Jagger in “Performance”. Planning permission was granted in October 1971 to demolished the building and this happened in May 1973. A block of flats with shops on the ground floor have been built on the site.

This photo was taken in June, 1959, during a reissue screening of “Mighty Joe Young” and “Where Danger Lives”, which began a three day engagement on Monday, June 15th, 1959. I have a complete set of Broadway programme details from when it opened in December, 1936, to when it closed in June, 1971, with the exception of the dates between June 22nd and August 2nd, 1959, during the national printers strike, when no programme details were published in the local newspaper. In fact, the strike went on for over six weeks and I only know the Broadway’s programmes for August because they managed to get a programme card printed for that month.

Scan of the March, 1958, programme card added to photos.

Demolition of the Broadway began in May, 1973, and a photo of the demolition was published on the front page of the Evening Sentinel newspaper at the time.

STAFF SAVE MEIR CINEMA IN FIRE.

Prompt action by members of the staff and men working in the building saved the Broadway cinema in Meir from severe damage yesterday afternoon. The fire, which destroyed the screen and surrounding curtains, was discovered by a member of the staff. While firemen were racing from Longton and Hanley, the staff and workmen tackled the blaze with fire extinguishers and buckets of water. Firemen soon had the outbreak under control. The cinema manager, Mr L.A.V. Plumpton, told the Sentinel today: “We were unable to open last night. We will open as soon as we can get a new screen and curtains, which should be in a day or two. The cinema was closed to the public at the time of the outbreak. The film that should have been shown last night was “A Night To Remember”.