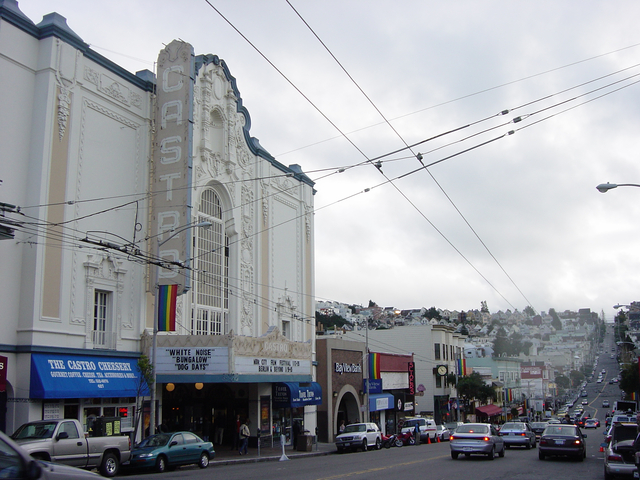 The Castro Theatre, situated at the corner of Castro Street and Market Street, is one of San Francisco’s most recognizable landmarks. This magnificent neighborhood theatre is decorated in the Spanish Renaissance style; with a Moorish Tent ceiling, Oriental Zodiac emblems, and Art Deco touches throughout. It was built by the Nasser Brothers and became the flagship theatre of their small circuit of neighborhood theatres. It was the first theatre to be designed by architect Timothy L. Pflueger.

Opened June 22, 1922 with Wallace Reid in “Across the Continent”. Waldemar Lind and the New Castro Orchestra and Carmichael at the Robert Morton pipe organ accompanied the movie. In 1937 a small fire damaged the auditorium, and Timothy L. Pflueger was brought back to redesign some damaged sections and design a new Art Deco style chandelier in the center of the auditorium celing. In 1950 the organ was replaced by a Conn organ, which, in around 1980 was replaced by a larger 3 manual 16 ranks Wurlitzer organ, the console of which was originally installed in 1925 in the the State (now Palms) Theatre, Detroit, MI. In recent years the Castro Theatre has hosted several premiers including in 1984 “The Times of Harvey Milk”, in 1985 the world premiere of “Buddies”, and in 2008 the world premiere of “Milk” which also featured the theatre in the movie. The Wurlitzer organ was removed from the theatre at the end of September 2015 and will be replaced by a 7 manual pipe/digital organ.

The theatre is still going strong in the country’s best known gay neighborhood. Playing films from across the spectrum of independent film, the Castro Theatre is one of the last picture palaces left in the San Francisco area.

In 1976 the Castro Theatre was designated San Francisco city landmark #100.

At least one article says “rehabbing the marquee” Many now have electronic signage on the marquee rather than just letters.

So many fine memories over the years at the Silent Film Festival. At least I got to fully enjoy it as a premiere film venue. Will always fondly recall what SF and the Castro used to be.

“People are making assumptions that are unfounded,” he (Greg Perloff, CEO and founder of Another Planet) said on Thursday, Jan. 20. “What we have talked about is doing a little of everything. The intention is to have film and film festivals, along with music and comedy and lectures. Ultimately, the public will tell us what they want to see.”

Here is G. Allen Johnson’s SF Chronicle article on the changes coming to the Castro and the importance of the Castro Theater to film lovers and film makers as a special place for cinema.

Another article from Hoodline yesterday and more comments from Another Planet CEO Gregg Perloff addressing the Castro’s history and future. Emotions have been running high over the Castro. Possibly these statements will qualm some fears over the amount of film presentations and community input but physical changes inside are likely regarding (some flexible front orchestra) seating, organ installation, sound upgrades, lighting, HVAC and marquee rehab and more.

Walking by the Castro today I noticed that the marquee has not been restored - yet. The very faded and peeling paint are still there. The neon on the vertical blade though appears to have been repaired after a naked man climbed it last August and damaged it.

The Google street view is from June 2021, and shows the faded, chipped paint and construction fencing in front. Those links don’t share here easily, because the CT website somehow changes the URL. But a copy and paste of the address into Google will get there.

Thanks for the link MOOse1111. Lots of photos of the theatre inside and out are included in the Page and Turnbull proposal (a local architectural firm with experience in notable old buildings) as well as the plans for a second floor lobby concession bar and HVAC air filtration system. I would have happily provided a direct link to the plans but your link will only allow for a downloaded file.

It is unfortunate that the sloped orchestra level will be partitioned and leveled for standees at concerts and temporary seating for other events. Wondering what that will do to sight lines for films or stage events when seated (except for those seated in the front row of each section)?

Hoodline article from March 17 has some of the architectural plans for orchestra level seating removal that are larger and viewable at this link:

The Castro Theatre and Another Planet Entertainment (APE) have announced their plans to celebrate the 100th anniversary of the historic theater.

Plans include a week of screenings featuring iconic films from each decade of the Castro Theatre’s history, from June 3 -12. Tickets to the screenings are on sale now.

Also, to mark the 100th anniversary of the theater’s 1922 debut on June 22, a day of movies that were all filmed in San Francisco will be screened.

Article, including schedule can be located here.