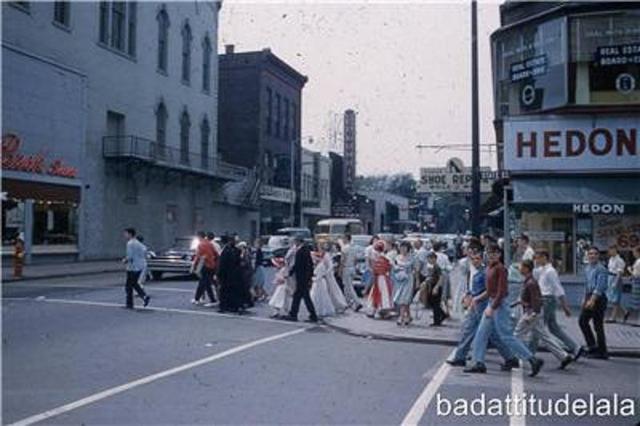 The Alpha Theatre opened in 1909, with is entrance at 812 State Street. It had 1,354 seats. By 1913 it had been renamed Columbia Theatre, and the entrance had moved around the corner to W. 8th Street. During the 1940’s it was under the control of Warner Bros. Circuit Management Corp. It operated thru to 1950 and beyond….

Other than this being a smaller theatre downtown, I have very little information about it. It was torn down in 1969.

Tom: I never knew there was a Warner-Columbia connection, but thank goodness the Warner still exists on State Street!

Many Republic Pictures played here. I saw Sands of Iwo Jima at the Columbia in 1949. It seemed old and rundown then. Not a topline theatre in Erie, but had good adventure movies for us pre-teens.

The 1936 AFY shows a Columbia theatre with 1,200 seats listed as closed at that time.

The Columbia Theater was located on the south side of West 8th Street between Peach and State Sts. in Erie, PA. It was demolished in 1969 and the lot sat empty for years. Both my father and grandfather worked at the Columbia. A 1918 advertisement for the Columbia lists it as “Erie’s most delightful photoplay theater” and also a place to “see filmdom’s greatest productions in the house of "super” pictures."

Warner Brothers also operated the old Strand on State Street until it was demolished in the late 40s for the old GC Murphy’s, and built the present structure on West 10th app. 1948. In 1971, Congress passed a law that the movie studios could not own the theaters in which their films were shown, so the Warner and Strand were sold to Cinemette. For a couple years, the Strand on West 10th also installed a Cinerama Screen and equipment., but later removed it to go back to the original format.

I went to this theater more times than any other downtown theater. They showed double features,and cartunes in later years. It was a clean place and I always thought of it as the poor man’s Warner.

The Columbia Theatre opened in 1909 as the Alpha House (a 1910 issue of Variety calls it the Alpha Theatre) at 812 State Street, according to a 1962 book, Erie, a History, by Herbert Reynolds Spencer, which also said that the entrance was moved to the 8th Street side of the building when the house was renamed.

The August, 1918, issue of Safety Engineering reported that a fire on May 18 had severely damaged the Columbia Theatre. The fire was of electrical origin and started in the basement under the organ. The building and contents were valued at $75,000, and property loss was $30,000. The theater was described as being “…back from street, and surrounded by other buildings,” so it sounds as though the auditorium had been shoehorned into the middle of a block of existing structures.

I haven’t found anything about the rebuilding of the Columbia after the fire, but the house was mentioned fairly often in the trade publications from 1919 on, and in the 1940s the house hosted a number of live music acts, mentioned in various issues of The Billboard.

The organ under which the 1918 fire started must have been the one the October 30, 1915, issue of The Moving Picture World said had recently been installed:

“The Columbia theater in Erie, Pa., recently installed one of the largest pipe organs in the United States. It is a 4-manual console, with choir, swell, great and pedestal organ, with an echo organ in the balcony. It has 2,600 pipes and is operated electrically from the pit. The work of installing was done by the Tellers Simerhof Organ Company, of Erie, Pa.”