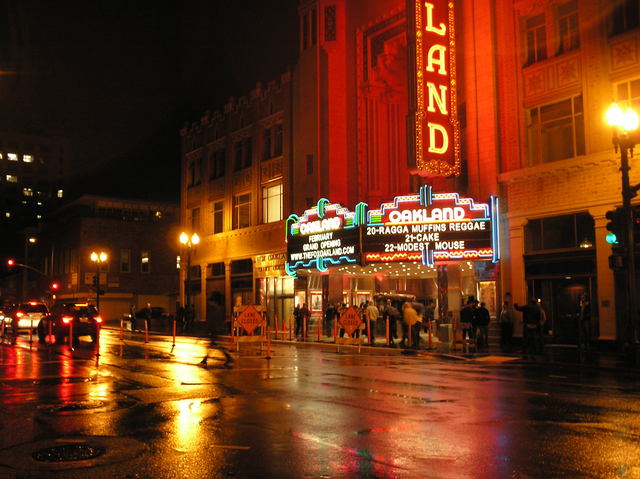 The auditorium of the Fox Theatre has a colorful East Indian Buddhist temple gloss applied over a standard squared off Weeks & Day interior. The entry portion of the main facade takes the form of a polychrome mosaic-like shrine, with smaller lantern-topped towers on either side. Trim with a Near Eastern flavor forms the cornice line for the remainder of the building.

Opened by West Coast Theatres as the West Coast Oakland Theatre on October 27, 1928 with the movie “The Air Circus” starring Louise Dresser, a Fanchon & Marco revue “Up in the Air” on stage, plus Hermie King and his Band. It was equipped with a Wurlitzer 3 manual, 15 ranks organ. It was renamed Fox Theatre in 1929 after West Coast Theatres was purchased by William Fox. The theatre was said to have the largest seating capacity on the Pacific Coast, of between 3,200 and 3,800 seats. Stars appearing live on stage over the years included Ginger Rogers, Bing Crosby, Frank Sinatra, and the Jimmy Dorsey Band.

In 1996, the City of Oakland purchased the theatre for $3 million.

Wagner Electric Sign Company of Ohio meticulously restored the marquee and vertical signs in the Fall 2001, before reuse plans were determined for the interior.

A $68 million restoration project enables the Fox Theatre to be used for a variety of events. An extensive restoration by the architectural firm ELS Architects has included travel to Morocco to find replacement light fixtures. An innovative seating design, movable and on platforms, will make the facility an intimate space or 3,000 seats, depending on production requirements. Chairs were fabricated to match the original theatre seating. It took almost a year to repaint the theatre’s ornate nine-color plaster ceiling as it had to be re-anchored and repainted with faux wood grain and metallic notes. With new construction added, the building will also be a home to the Oakland School of the Arts and to a sixth to twelfth grade public charter school.

Operated by Another Planet Entertainments, the Fox Theater reopened on February 5, 2009. Together with the nearby Paramount Theatre, and Grand Lake Theatre, Oakland is now a ‘must visit’ destination for any movie palace enthusiast.

The Fox Theatre was added to the National Register of Historic Places on February 2, 1979.

Friday was my 70th birthday, and I wanted to see the Fox. My kids took me there. I haven’t been inside the Fox Oakland for 50 years. amd it was just absolutely stunning inside. There were a lot of things missing, like the chandeliers in the ceiling and a mural of the bay bridge, treasure island and the bay when you first walked in. The staff and security was incredible, they were everywhere, and very friendly. The music was very good, a band called OMD, but the acoustics in the theater were terrible. The sounds bounced off the walls like echoing thuds, and it gave me a headache (age I guess), so I went to the mezzanine to relax for a bit. I was sitting there for less than 10 minutes and two different times, staff asked to see my ticket. The security was checking everyones tickets to make sure they were in the section they were supposed to be in. After being asked twice to see my ticket, I got irritated, and they didn’t ask me anymore. I don’t see how these kids can afford the high priced drinks in there, My son got a screwdriver and it was over vodka’d. It was so good to be in there again, it brought back a lot of memories. The audience was good mannered and everyone was having a great time. The staff and security were just wonderful, just pesty and doing their job. I asked if they could get the statues to spew smoke again someday, they didn’t know that it the statues did that. Aside from the terrible sound system, it is just beautiful inside. I sure miss Capwells, Milens Jewelers, and the Newberry’s. But the area sure looks nice and its bustling again.

Thats for the update on the Fox balconyclosed, and hope you had a nice Birthday.

This article about the restoration of the Fox Oakland Theatre is by Kurt Schindler, principal of ELS Architecture and Urban Design, the Berkeley firm that did the plans for the renovation of the theater.

The firm’s web site also offers this page with several photos of the Fox.

In addition to the Fox, ELS has designed the restorations of the Grand Theatre in Tracy, California, the California Theatre in San Jose, and the Arlene Schnitzer Concert Hall, formerly the Portland Theatre, in Portland, Oregon. More recently, ELS handled the renovation of the old AMC Kabuki multiplex for Sundance Cinemas.

Two photos of the exterior taken in 2000, just after restoration had apparently started, but was not yet visible!

If you see a music event here and sit up stairs you won’t see the stage as most people stand up and block the view. The music is way to loud. Bring ear plugs. They even sell them in the lobby at the Fox Oakland Theatre. The manager needs to check all the people smoking up stairs and have them sit down. They were not smoking cigarette’s. A fire danger and the ushers don’t care. No seats downstairs, you pay a high price and have to stand all during the show. Nice job on all the color lights when they have them on. Hope some day they show some movies on 35mm film or DCP and put in a large screen and get the curtain to work. APE the gang that books the place offers nothing for seniors to enjoy. Check the Fox out and take the Bart train to almost the front door. Don’t forget your ear plugs!!!! 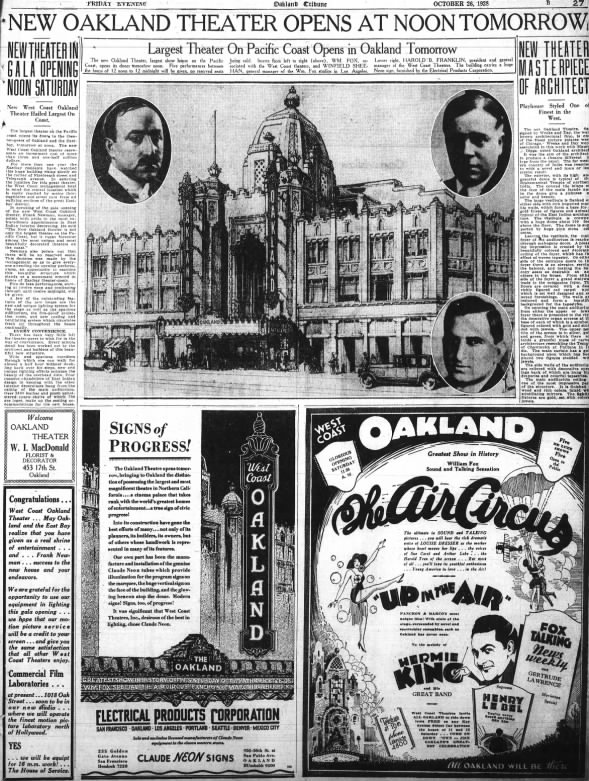