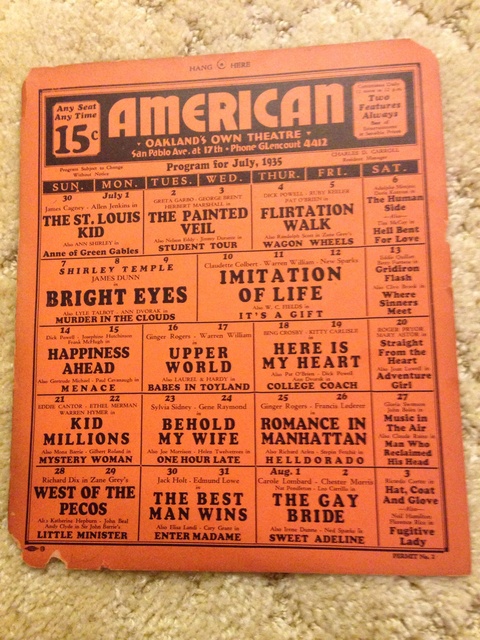 Originally opened as the Reliance Theatre on September 2, 1916 with seating provided for 1,800. Re-named American Theatre on August 4, 1917. It was remodelled in 1931 to the plans of architect Alexander Aimwell Cantin. It was renamed Esquire Theatre on August 31, 1939 and was refurbished in 1940, but suffered a fire in the balcony in July 1940. Repairs were carried out and it reopened. It was still open in July 1950, but was demolished in 1953.

The Esquire was originally built about 1892 as the Reliance Building, later Reliance Athletic Club; it was altered and became known as the American, was modernized in 1932 with new drapes and seats, and an Art Deco facade and reopened with a showing of “Forbidden,” staring Adolphe Menjou and Barbara Stanwyck. It became the Esquire August 31, 1939.
Closed by a (cigarette-caused) fire in the balcony June 28, 1940, the Esquire was repaired and reopened on August 30 that year with searchlights, Hollywood stars, and either (according to one historical document) “When the Daltons Rode” with Randolph Scott, or (according to an Oakland Tribune article) “When Tomorrow Comes” with Charles Boyer and Irene Dunne, both of whom were reportedly among the stars at the reopening (possibly both films were shown that evening).

The Esquire was operated by Blumenfield Theatres, apparently for its entire run as a theater.

Here is an August 29, 1940 article describing the re-opening:

Searchlights will sweep the sky in Oakland tomorrow night, just as
they will in London, Berlin and other great cities in Europe â€" but
the reason fnr the illumination will be quite different. Instead of ferreting out enemy members the searchlights will be merely functioning as signposts to the new Esquire Theater, which is throwing open its doors at 17th and San Pablo to greet the season with a page of American history called “When the Daltons Rode.”

It was just a year ago today that the Esquire, remodeled from
the old American, celebrated its rebirth as a Warner product theater
ndcr the joint management of Joseph Blumenfeld and Clarence Laws.
Since then Europe has been tossed into a war and the Esquire has had a disastrous fire.

The Esquire is part of the chain of Blumenfeld theaters which include
in the Eastbay the Roxie and Franklin in Oakland, and the Berkeley
and Oaks in Berkeley. Opening night festivities will be under direction of Laws who is general manager for the Oakland group. The pictures for the future will be drawn from the budgets of Warners, Columbia, Universal and United Artists.

One of Oakland’s historic landmarks, known since 1939 as the
Esquire Theater and since early motion picture days as the American Theater was being razed today. Joseph Blumenfeld, president
of Blumenfeld Theaters, Inc., said the theater at Seventeenth Street
and San Pablo Avenue which was closed more than a year ago is being torn down to make way for construction of a $200,000 drive-in restaurant and cocktail lounge.

The new structure, Blumenfeld said, will include a restaurant
and drive-in area on the ground floor with a cocktail lounge and snack bar on the second floor. he said it will be leased to the operator of a Berkeley drive-in.

Earlier this year, a permit was granted for weekly “name-band"
dances in the building. However, after a storm of protests which
reached the City Council, James McCoy, a San Francisco dance
hall operator, withdrew his application for the permit.

The theater site was occupied in early days by Bice’s Academy,
an early day dance hall. It was also headquarters for the Reliance
Athletic Club and for a time of Acme Athletic Club.

The theater, after being known for many years as the American,
was renamed the Esquire in 1939. It was damaged by a fire the following year.

Here is an April 1950 ad from the Oakland Tribune:
http://tinyurl.com/2qxcqs

Given gsmurph’s information that this house was located the Reliance Building, it’s clear that the Esquire was the Reliance Theatre that was mentioned in a list of current construction projects by the Van Sant-Houghton Company, published in the August, 1916, issue of The Architect and Engineer of California: “Reliance Theater and office building, Oakland (Seventeenth Street and San Pablo Avenue.)

The Reliance Theatre was mentioned in quite a few publications in 1916 and 1917, including the September 30, 1916, issue of The Moving Picture World, which said that the house had opened on September 2nd. An earlier issue of the same publication said of the theater, then under construction, that it was “…on the site of the old Rice Institute, but the old building has been practically rebuilt.”

The most effusive piece on the theater I’ve found is from the September issue of Pacific Service Magazine, the house organ of the Pacific Gas & Electric Company:

“Reliance Theatre, Oakland, threw open its doors to the public on Saturday evening, September 2d. The theatre is Oakland’s largest and one of the most attractive on the Pacific Coast, nothing having been spared that goes to make for the comfort, convenience and restfulness of a modern theatre.

“At the opening hour, the theatre stood forth, a blaze of light and color. Floodlighting projectors, located across the street, illuminated the three facades of the building. On the gore, a large vertical electric sign boldly announced the name of the new recreation place, and electric signs above the entrance parquet told of the high quality attractions to be seen there. In all, twelve hundred and fifty 5-watt sign lamps were used and the twinkling of the traveling borders produced the effect of a myriad of diamonds, sparkling in the white light.

“The exterior of the building is finished in white, the entrance and ticket-booth being of marble and white tile. Throughout the interior, a color scheme of old ivory, pink and blue harmonizes with the heavy blue carpet and draperies. Massive indirect lighting fixtures add to the richness of the interior decorations. The organ lofts are located on both sides of the picture screen, and in the near future a $20,000 organ will be installed; a small organ temporarily serving.

“The building itself is a Class A structure with main floor and balcony, and seats 1800 people. Located on a gore, it has exits on two streets besides a private court, and in an emergency can be emptied in less than two minutes. The ventilation system is a departure from established custom. A large electrically driven fan forces the air into a large air chamber in the basement of the building, from which pipes lead to outlets placed under every alternating seat on the main floor of the theatre. Exhaust fans, located at the rear of the theatre, carry out the vitiated air; a complete change taking place every ten minutes. A furnace heats the incoming air when desired. Outlets from a stationary vacuum plant are installed throughout for cleaning.

“The operating room is of reinforced concrete lined with galvanized iron and is fireproof throughout. Three Simplex projecting machines are installed, one being used for emergency only. All electrical apparatus is in duplicate, there being two mercury arc-rectifiers and a motor-generator set for supplying direct current to the picture machines. Full assurance of a reliable and continuous source of electric supply is given. A 3-phase, 4-wire, overhead service supplies the motor-generator set, emergency lighting and the power load throughout the building; single phase, 3-wire, underground service supplies the general lighting of the building and the two rectifiers. Both lines are supplied from the 30,000-h.p. steam plant, thereby backing up all that the name ‘Pacific Service’ implies. The total installed load at present is as follows: 3-phase power, 15 h. p.; rectifiers, 6.5 k. w.; lighting, 22.8 k.w.

“The ticket office is equipped with electrical ticket-selling machines and automatic change-making apparatus. Pretty girls in uniform do the ushering and distribute programs. The Reliance Theatre is a credit to the city and to the people who promoted it. ‘Pacific Service’ welcomes it to its list of consumers.”Despite the many mentions of the Reliance Theatre on the Internet, I’ve so far been unable to track down the name of its architect.

Plans to remodel the American Theatre in Oakland were announced in the December 26, 1931, issue of Building and Engineering News: 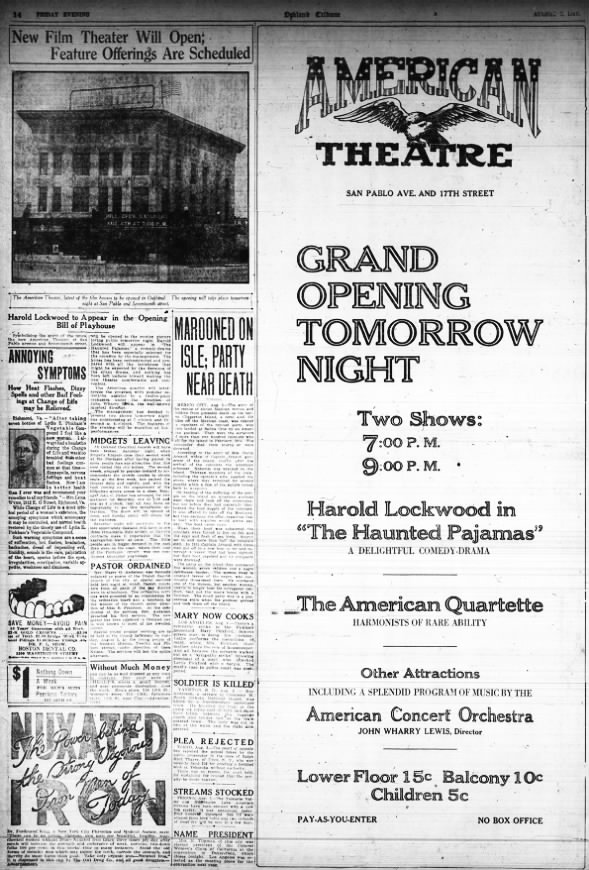 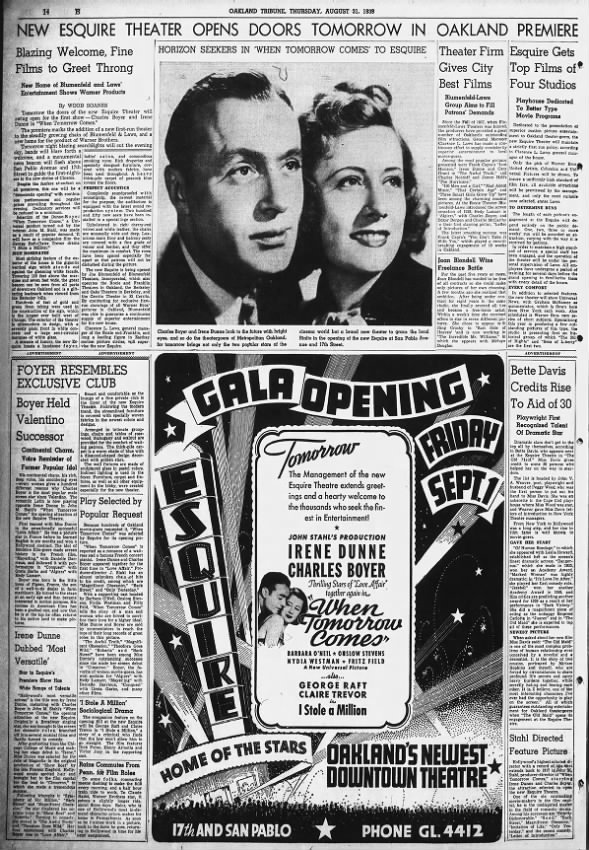