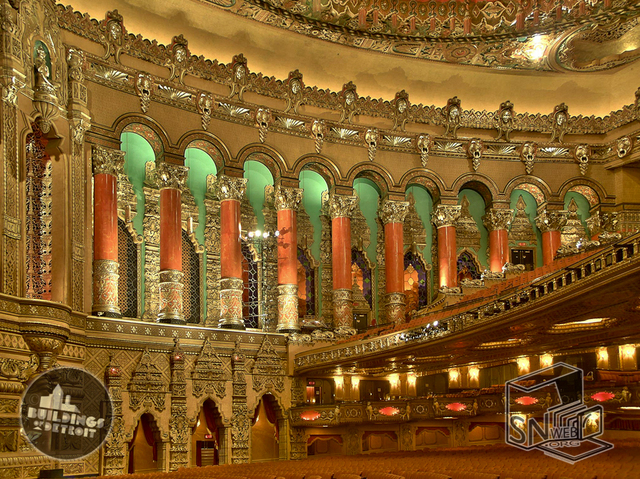 The Fox Theatre was opened September 23, 1928 with Janet Gaynor in “Street Angel”. It seats over 5,000 people and is Detroit’s largest movie palace. In 1988, the Fox Theatre underwent an $8.1-million restoration. Since the restoration, the Fox Theatre has become one of the most successful theaters in the country combining broadway shows, concerts, special events and the occassional classic film.

Martin and Lewis on the set of “Money from Home” promote a May, 1953 engagement at the Fox:

By the way, that’s a massive 3 strip Technicolor 3-D camera rig on the set. MONEY was one of only two movies filmed with this particular camera.

Picture of the projection booth. Link

As a child I became interested in the new-fangled cinema photography as it was being presented: Cinerama, CinemaScope, etc. As my birthday gift in 1953 I visited the Fox to see the first film released in CinemaScope, “The Robe.” I know that the Fox just prior to showing this film was advertising its films as being on “the giant screen,” as other theaters downtown were doing. My questions: What were the dimensions of the old screen at the Fox? The dimensions of the ‘scope screen?

In neighborhood theaters, larger screens were installed, but masking was used to cover the upper part of the screens and to open on the sides in order to provide the aspect ratio for CinemaScope. In other words, ‘scope films actually used less square footage of the screen than did non-'scope films. I wonder whether the Fox also did this, although for years after every film shown at the Fox was in CinemaScope or its successor, Panavision.

Last night the Republican candidates for president debated at the Fox Theatre. Shown on Fox TV & elsewhere, the lit marquee & exterior, the grand lobby and the auditorium all looked glorious!

Indeed, the Fox looked magnificent last evening on tv. I wonder whether hi-def tv gives us more beauty than is actually seen by the eye. When last I visited a couple years ago the auditorium was in need of some fresh paint and new upholstery on the seats. None of this was visible last evening.

R.I.P. Mike Ilitch, who saved the Fox & restored it.

The new movie “Detroit” had its world premiere here July 25.