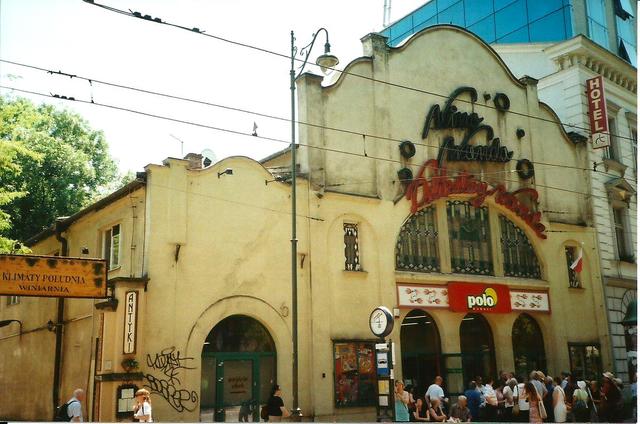 It is now home to a supermarket, but fortunately the old illuminated sign has been retained, with a matching sign proclaiming its new role. The cinema opened when the city was still under Austrian administration; South Polish artists worked closely with their Austrian counterparts and were strongly influenced by movements such as the Vienna Secession. The façade has some stained glass windows with a geometric Art Nouveau style design typical of the Vienna Secession movement, but it is not clear whether these are original or were installed later on.

It is still possible to ‘read’ the building as a cinema. There is a small gallery above the shop floor, the entrance foyer was at the screen end - and can still be discerned to the left of the main façade, and the projection box can still be seen to the rear of the building.

Princess Wanda was the daughter of King Krak, the city’s mythical founder. She is said to have thrown herself into the Vistula River to prevent her marriage, which would have given control of Poland to a foreigner. The cinema might have been given her name as a statement of national pride in the twilight years of the Austrian administration.