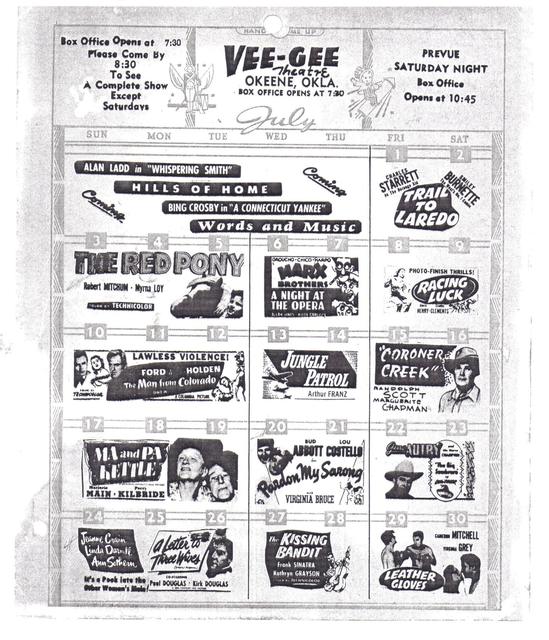 Roetzel sold the theatre in 1923 to W.S. Allen and A. C. Martz, editor of the Okeene Record. Martz renamed the venue as the Rialto Theatre on May 25, 1923 showing Richard Talmadge in “Taking Chances” supported by a comedy short starring Vera Reynolds, “Designing Husbands.” Under new operators, the Rialto wired for sound to remain viable. In 1936, new operators took on the location likely on a new 20-year lease and changed the name to the Roberta Theatre.

Orville Von Gulker took over the operation in 1938 but he became known for something far different in 1939 when he created the first ever Rattlesnake Roundup. Von Gulker’s snake roundup is a tradition that carried on into the 2020s. He also became head of the new Allied Theatre Owners of Oklahoma, a trade association.

In 1948, the Von Gulkers changed the name of the theatre to the Vee-Gee Theatre as they were often referred to by friends as the Vee-Gees. Regular movie screenings ended in September of 1956 at end of lease with the theatre ending up in the 1957 delinquent tax roster - never a good sign. However, the venue was used for special events and agricultural trade film screenings until at least 1962.