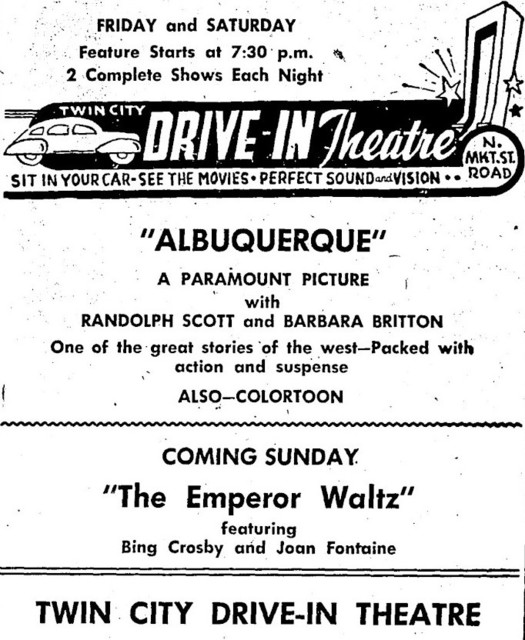 The Twin City Drive-In opened in September of 1948, with room for about 600 cars. It was the first drive-in to open in Champaign county, built at a cost of more than $150,000. The opening film was “Frontier Gal”. Within a month of opening, the size was increased to accomodate 150 more cars due to the drive-in’s popularity.

In 1954, a large CinemaScope screen was installed, as was a playground for children and the concession stand was enlarged. Two years later, burro rides for children were added. During the mid-1950’s until 1960, the Twin City Drive-In was operated by the Van Nomokis chain. In 1960, the Kerasotes chain acquired the drive-in (at that time, its third theater in the area, with the indoor Co-Ed and Princess added a few years earlier).

By the end of the 1960’s, the Twin City Drive-In had gone from mainly second-run, B-grade Hollywood features and Westerns to mainly horror and adult-oriented films. During the late-1970’s, a typical double-feature consisted of titles like “Satan’s Playthings” and “Centerfold Spread”.

The drive-in finally was closed by Kerasotes in 1981 and its screen tower demolished not long after, its marquee and concession stands allowed to eventually fall into ruin.

Today, a furniture store is located on the site.

Here is an item from Boxoffice magazine, January 1960:

SPRINGFIELD, ILL.-George Kerasotes, president of Kerasotes Theaters, has acquired the Twin-City Drive-In at Champaign from Mrs. Penelope Mandusich, widow of the late Van Nomikos, Chicago exhibitor. Kerasotes will remodel and refurbish the theater. James Ackron of Tipton, Ind., formerly with the Mallon Bros. circuit, will be engaged as manager.

The address for this theater is 2212 N Market St, Champaign, IL 61822. This points directly to the entrance road. The entrance and the screen are now The Salvation Army. The field is now Value Storage.