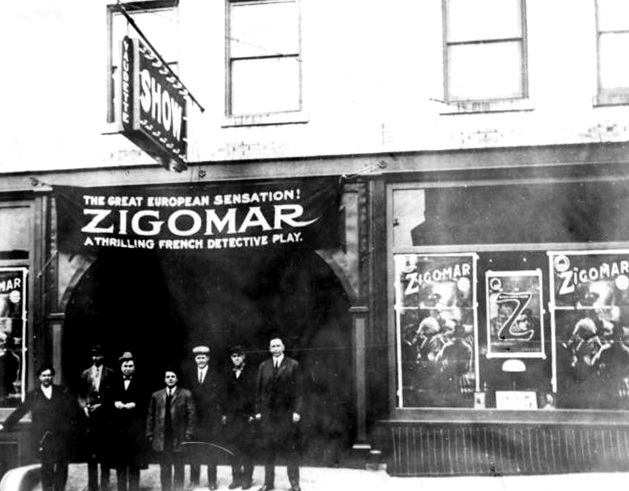 The Vaudette Show was opened by late-1911. Later renamed Vaudette Theatre, it was closed as a silent movie theatre in 1927.

Shown ‘From Plans’ on the Nov. 1910 Sanborn, so it may not have been completed yet. This was actually a much larger building than the photo indicates. Quite deep, solidly constructed. The capacity is shown as 800.

I wonder if the ID isn’t wrong. I’d be shocked that such a large purpose-built structure would close without making the conversion. In addition, the capacity mismatch is pretty extreme. That said, neither the 1910 or 1916 maps show any other theaters.

The theater business in Sterling must have been tough in the early days. If the 1910 map shows no theaters other than the Vaudette, the two that opened in 1909 must have gone under by the time the map was made. Three items datelined Sterling appeared in Moving Picture World from March to June that year. The March 6 issue said “Adolph Loux will open a new moving picture theater on West Third Street.” The June 5 issue said “Clifford Van De Mark has purchased from Loux Brothers the Gem Theater and has taken possession.”

Meanwhile, the May 5 issue noted that “Paul V. Baxter has opened a new vaudeville and moving picture theater.” I’ve not been able to track down either a name of a location for Mr. Baxter’s theater.

The only vacant space on the 1910 map for W 3rd was 110, but that doesn’t necessarily mean anything. That was a much denser area than the desolate wasteland of vacant lots and surface parking there today.

I came across an item in The Nickelodeon of May, 1909, saying “Paul Baxter, of Morrison, has secured a lease on the Rollaway and will open a first-class moving picture show.” A bit more searching led to a book called History of Whiteside County, Ilinois which was published in 1908, which says that The Rollaway was a roller skating rink opened early that year and located on First Avenue. The rink itself was 46 feet wide and 95 feet deep, so could have accommodated a good-sized theater such as the Vaudette. It’s conceivable that Mr. Baxter’s plans had not yet come to fruition in November, 1910, and that the Vaudette was indeed located in the former Rollaway rink.

No, the theater was new construction, replacing a large feed/livery operation. The roller skating rink was at 314-316, the later location of the State (it had the same footprint as the theater, down to the two story building in the little nook, but appears to have a different construction).

Is the rink on the 1910 map? If so, Baxter’s project must have fallen through, or his theater had a very short life and the building then went back to housing a roller rink.