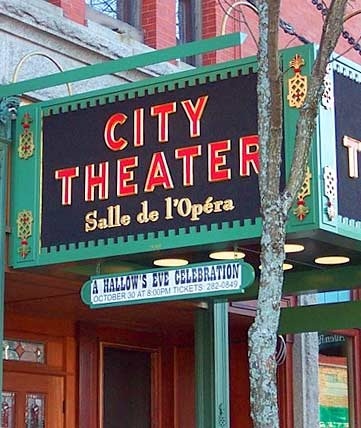 The Biddeford Opera House opened in 1860 at the corner of Adams Street and Main Street. Edwin Booth and Joseph Jefferson performed at the Opera House in its early years. In 1894, a fire destroyed the first Opera House, but it was immediately decided to rebuild it, and the new Opera House opened January 20, 1896.

Among the stars to perform at the Opera House in the early part of the 20th century were W.C. Fields, Mae West and Fred Astaire. In the 1930’s, the theatre became a movie house, and remained so until closing in 1965 due to the deteriorating state of the theatre.

In 1976, concerned citizens decided to restore and reopen the old Opera House, which was once more opened in 1978 for live entertainment. The City Theatre, as it is now known, continues to be restored and renovated to this day, while presenting performing arts, concerts, dance and comedy acts.

The theatre is also rumored to be haunted by a ghost named Eva, an opera singer who died in her dressing room after her performance during the first few years of the 20th century.

Under Biddeford Maine in the 1897-98 edition of the Julius Cahn Official Theatrical Guide is listed the City Opera House. K.W. Sutherland was the Mgr. The theatre was on the second floor and had electric illumination. The seating capacity was given as 1,075 which is higher than the capacity today. The proscenium opening was 25 feet wide X 39 feet high, and the stage was 35 feet deep. Local newspapers were weeklies: Journal and the Times, and the Saco Record. Hotels for show folk were the Thatcher and Smith’s. Local railroad was the Boston & Maine; the 1897 population of Biddeford was 18,000.

The architect of the 1895 Biddeford City Hall complex, including the Opera House, which reopened on January 20, 1896, was John Calvin Stevens.