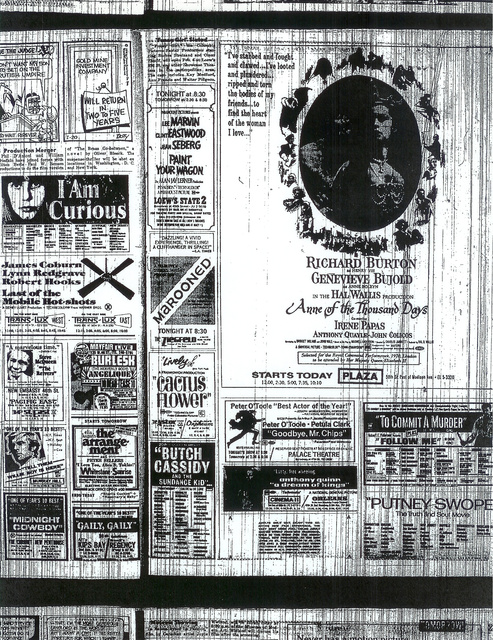 The Plaza Theatre opened on January 20, 1930, and was designed in a Tudor style. This theatre later had a modern style that somewhat mirrored the Beekman Theatre with it’s rising balcony toward the back. It had a decent sized screen and sound. The curtains closed after every presentation. I saw “Crossing Delancey” there, and a year before it closed I saw the indie film “Straight Outta Brooklyn” there. It was on a side street and was hard to find. It’s amazing how that theatre stayed in business.

It closed on February 1, 1996 and became some kind of tourist attraction showing films about New York like the old New York Experience used to do in Rockefeller Center. That later stopped and now it’s home to an Asian sushi restuarant named Tao.

When the Plaza joined the Rugoff – Cinema 5 group, the roster of theatres also included the Murray Hill, the 5th Avenue Cinema, the Art & the 8th St. Playhouse. There was fierce competition with Walter Reade Sterling in the showcasing of the international “art house” films. As jay58 has mentioned in earlier posts, the Rugoff corporate offices were around the corner from the Plaza at 595 Madison Ave. Oh, what I would have given to have lived next door to the Plaza!

Came here in 1965 on my first date to New York City from lower Westchester at age 15! First to Reuben’s down the street for a meal, then over to the Plaza Theater on 58th St. We saw “The Knack” with Rita Tushingham. I am so blessed to have a good memory because I never want to forget any of it. There is no place like New York City.

I just posted a fantastic 1929 photo of the Plaza! Have a look…amazing! Thank you, NYPL.

i object to the statement in the intro that this theater
was “hard to find”. how in God’s name was it hard to find
when the address was clearly stated in the ads?

“Hard to find” is not really accurate. The problem was that patrons expected it to be at the Plaza Hotel and would show up at the Paris or Cinema 3 at showtime looking for the Plaza movie they wanted.

to Al A. thanks for your seconding my thought that the
Plaza was by no means “hard to find” as stated in the intro.
again since the address was clearly stated in the ads for
whatever film anyone who could see should have had no trouble
finding it.

in tis last years of operation whenever I went it was always well attended. so why did it close? this is especially perplexing since they didn’t demolish the building.

also my fondest memory of the Plaza. I went to see the highly acclaimed film Hester Street and was sitting in the downstairs lobby which I am sure you agree was gorgeous waiting for the next showing to begin. I was chatting with an older couple in the few minutes I was waiting. when we went up after the previous audience and left I suddenly realized who the older gentleman was I had been chatting with- Richard Rodgers.

…almost 3 years later to the day and we’re still having the “hard-to-find” conversation! Funny.

I admit I tend to repeat myself but for someone who might be reading the intro for the first time I just wanted to make the point the Plaza was never hard to find.