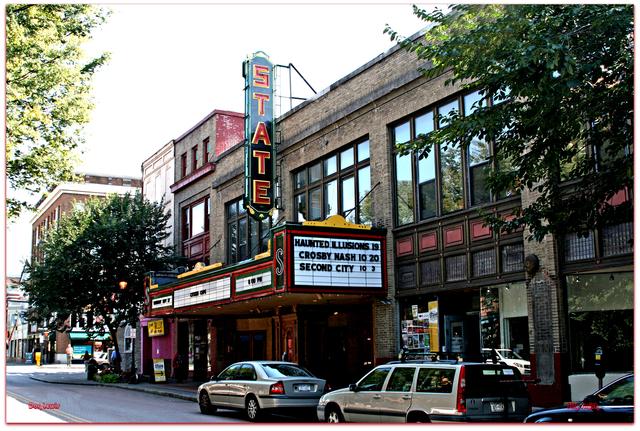 Ithaca’s State Theatre first opened its doors on the evening of December 6, 1928 for a 6 o'clock showing of the movie “Show Girl”, starring Alice White. The organist was Harry Springer and admission was 50 cents. Originally not a theatre, the building had started out as a security garage and automobile showroom in 1915, but this business moved out in 1927.

The Berinstein family, owners of several Upstate NY theatres, bought the property and hired architect Victor Rigaumont to transform the structure into a “cinema palace and vaudeville hall”. This was done at a cost of about half-a-million dollars. A $26,000 Link organ was purchased from Binghamton. Original capacity has been described as 1,818 seats. Current capacity is 1,626.

The primary style is Collegiate Gothic, a popular building design seen on American college campuses roughly from about 1900 through the 1930’s. It was meant to emulate that seen at the English institutions of higher learning like Oxford or Cambridge. This plays out in the State Theatre’s auditorium with the addition of colorful heraldry, small shields, etc. Additional elements of Moorish and even Renaissance design create an intriguing mix of styles. Finally, the State Theatre was designed as an Atmospheric style theatre. The deep blue ceiling has twinkling lights scattered through painted constellations. Originally, a cloud machine added to the overall effect, perhaps one of watching the movie or performance under a dark summer sky in a castle courtyard.

After the decline of vaudeville in the 1930’s, the State Theatre operated primarily as a movie theatre. The balcony was divided off for a second cinema on July 14, 1976. Condemned in 1997 due to accumulated decay, the property was bought by the non-profit, Historic Ithaca organization in 1998. An official reopening was held December 5, 2001. Since then, the theatre has been used mainly for concerts and other live performances. It has been garnering more well-known acts and is once again becoming a popular venue in this lively, two-college town. Revenue helps cover operating costs and is funneled back into restoration when possible. The project has entered Phase II. A dollar-for-dollar matching grant of $150,000 has also been awarded to the project by the Save America’s Treasures (SAT) program. Currently, more than half the amount has been raised, with a deadline of July 2005.

Great to see this most recent photo as it shows needed work being done on the marquee!

The State’s website is now at www.stateofithaca.com There is a good explanation of the Link organ in the “History and Restoration” section.

MikeR: Great organ story..the kind we all love to read! Thanks!

No problem. Hopefully they will get enough funds to complete the restoration of the organ -in addition to the theater. It’s one of the comparatively few Link organs left in existence (interestingly enough, one of the surviving Links is in a museum in Germany).

The State Theatre appears to be alive and well and beautiful in downtown Ithaca! I do wish they still showed periodic movies but they seem to do well as a live performance venue in this prosperous little town.

July 14th, 1976 grand opening ad in the photo section for its reopening as a twin cinema.

I can’t find anything about the organ on the stateofithaca link.