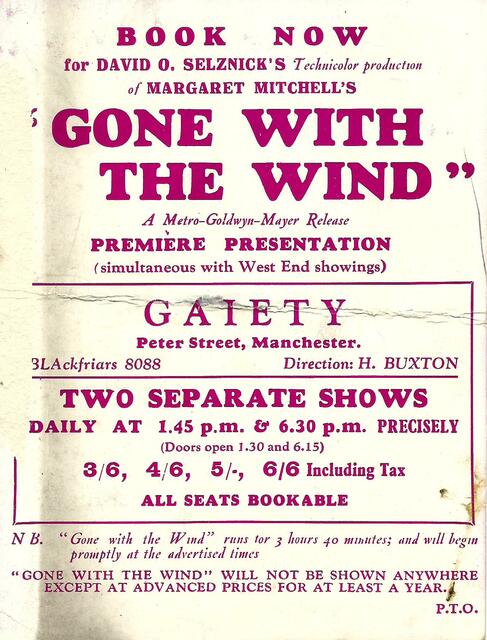 In 1878, in Manchester city centre, at the junction of Peter Street and Mount Street, on the site of a former circus, the Gaiety Theatre of Varieties was constructed. Unfortunately, it burnt down in 1883, but it was rebuilt, and it re-opened on 22nd December 1884 as the Comedy Theatre, with 1,434 seats. Designed by architect Alfred Darbyshire.

This closed in March 1903, but re-opened in the autumn under the management of the United Theatres Company, and continued to be run by them until 1907, when they sold the building to Miss Horniman. It was remodelled in 1908 to the plans of noted theatre architect Frank Matcham, reopening on 2nd September 1908. Live theatre continued until 1920, when the building was sold to Abe Hollander, managing director of the Futurist Picture House, further down Peter Street (see separate Cinema Treasures entry).

He re-opened it on 18th July 1921 as the Gaiety Picture House, with a mixed programme of films and live entertainment. Famed actress Ellen Terry officiated at the opening ceremony.

The first film shown, in the week of 25th July, was “The Luck of Geraldine Laird”, starring Bessie Barriscale. This was supported by Blattner’s Orchestra and singer Desiree Ellinger.

The Gaiety Picture House had a great success when, in the two weeks after Christmas 1926, Douglas Fairbanks starred in the stirring adventure “The Black Pirate”. Management announced that “6,000 patrons were delighted, and 4,000 disappointed at not being able to get in”.

Talkies arrived on 19th August 1929, with the installation of a RCA sound system and the Alexander Korda’s production of “The Squall”.

By 1930 the Gaiety Theatre name returned to the theatre which had temporarily become part of the Associated British Cinema(ABC) circuit, and took its releases, but it soon reverted to its independent status and continued to present variety, music hall and pantomime while primarily functioning as a cinema.

In January 1935, the Gaiety Theatre, now owned by Gaiety Theatre Ltd., was leased by Regent Circuit Ltd. That continued until the pantomime “Dick Whittington”, over Christmas and New Year 1937-38, after which the theatre reverted to its original live productions.

After closing for its summer break in June 1939, the Gaiety Theatre didn’t re-open until Monday 26th February 1940, when it once again became predominantly a cinema, beginning with “The Real Glory”, starring Gary Cooper.

This was the time of the Gaiety Theatre’s greatest triumph: a record run of 22 weeks, until Saturday 2nd November 1940, of “Gone With The Wind”, starring Clark Gable and Vivien Leigh.

In 1941 the Gaiety Theatre scored a another huge success with Chaplin’s “The Great Dictator”, which played for six weeks, the same extended run achieved by “Dr Jekyll and Mr Hyde”, starring Spencer Tracy and Ingrid Bergman, the following year.

Still a popular cinema, the Gaiety Theatre was forced to close from March to September 1948 while essential work regarding fire regulations was carried out. This included moving the projection box from the stalls to the circle and the removal of the gallery seating.

However, into the 1950’s the Gaiety Theatre began to suffer, particularly as most of the big releases went to Rank and ABC cinemas, and it had to rely more and more on double-bills and films from the minor studios.

The inevitable end came on Saturday 1st August 1959, the final film being “Al Capone”, starring Rod Steiger. Demolition began almost immediately, and soon the Gaiety Theatre was no more. Rather ironically, Television House was built on the site.