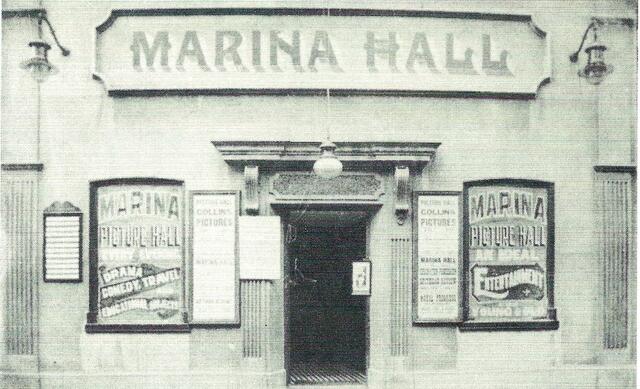 In Deal, Kent, near to the junction of High Street and Duke Street, the Assembly Rooms dated from 1795.

From 11th April 1910 the premises, by then known as Marina Hall, were converted into a cinema, the Marina Picture Hall. Charles Collins, who had converted the building, personally introduced the film shows, and added his own quips and comments on the action!

The sets of wooden-backed seats were set either side of a central aisle, and there was a low brass rail, supporting a curtain, separating the front seats from the more expensive ones at the rear.

The projectionist was Jack Baker. The pictures were projected using a Kamm, a Wrench and an Urban projectors and current was provided by a Crossley gas engine with a Crompton’s dynamo. This powered not only the projectors but the internal and external lighting as well.

However, all this effort was to no avail, and the Marina Picture Hall was a very early casualty, closing in late-1913.

The building was initially used by Erridge’s Corn Stores, then for a similar purpose by T. Denne and Sons Ltd. It was eventually demolished as part of a wider house-building scheme; its site is mainly now occupied by Clarence Place.