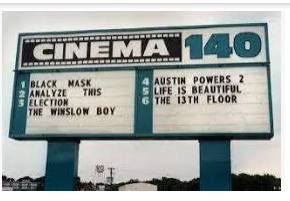 Opened in 1968 as the Compass Twin Theatre. It later expanded to 4-screens and then to 6-screens. Lockwood and Freeman owned the cinema up until 1987, selling it to Samia Company.

D/B/A as Theatre Development Enterprise which operated Cinema 140 along with Belmont, Dedham, Norwood and Attleboro and I went up to see what we could do to turn the cinema into a profit. I suggested a dinner theatre concept in December of 1987. I was given a task to open a restaurant in which I opened as Michael’s Place Pizzeria in Attleboro next to the Union and the idea was to go forward with dinner theatre at the Union then Cinema 140. Profit margins dipped and canceled those plans, instead the change of names to Attleboro Cinemas was scheduled and then closed a second time in 1989 at which point I left the theatres as G.Manager/D.M assistant manager.

I went to work opening as one of three managers for Newport Creamery in the New Silver City Galleria Mall on March 1, 1992. The Cinema 140 was closed in 2000.