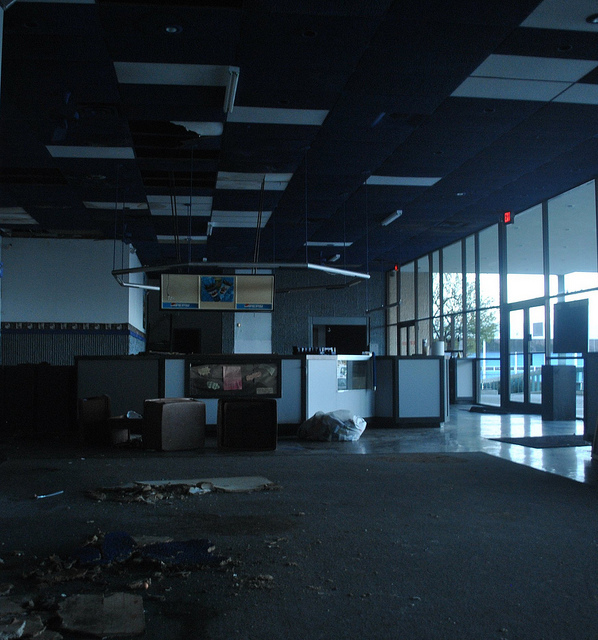 The Beaver Valley Cinemas opened on December 23, 1977. The six screen theatre was opened by Mid-States Theaters Inc. It was then sold to USA Cinemas in 1985 and later became part of Loew’s Theatres. It was then sold to Side Line Theatres in 1999. The Beaver Valley Cinemas closed in April 2001. It reopened and finally closed in 2009. It was demolished in December 2015.

My very first job was working at the Beaver Valley Cinemas. It was 1977 and I was 17 years old. I answered an ad in the paper and went to the Salem Mall Cinemas (with lots of other people) to interview for the job…and got it.

We helped clean the place up for the grand opening, and I was officially a movie usher on their grand opening night. I don’t remember the exact date or what films were showing. I’m thinking that The Goodbye Girl, Looking for Mr. Goodbar, Semi-Tough, Saturday Night Fever, Oh God, and Annie Hall were among the first. I know they all played there. I remember that hardly anybody showed up for Annie Hall until it won an Oscar for Best Picture. Then it sold out for weeks in a row. A man named George Carpenter was the original manager. Later, he went on to become a district manager for Midstates Theaters. The last I saw of him (2005) he was running his own music recording company. The original projectionist was a guy named Rick (I think) and Tom (the last names escape me). Both, I believe, were the only union projectionists that ever worked there.

I worked several positions in the theater. I started as an usher, then worked concession, and then ticket sales. I also trained and eventually became a projectionist. I was an assistant manager there for a while, but gave that up (got hassled because my girlfriend worked there) and just did projection.

The theater had six screens and 10 projectors. The center four cinemas had two 1-hour projectors each. The 20 minute reels that were shipped to us were spliced into two one hour reels, metal tape was put on the edge of the film at the end of the first reel and sensors in the projectors automatically switched from one reel to the next automatically. These 8 projectors were visible on platforms from the lobby so that people waiting for the next movie could view them. This caused mixed results. For the most part, people were very interested in seeing the projectors. But if something went wrong with a movie (out of focus or film break) they could come out to the lobby and yell at you, heh. The job of running these projectors was basically running around like a madman when all the movies were starting… then relaxing for a bit… then running around rewinding the first reels… then relaxing a bit… then running around threading up the first reels and starting the movies over again while the second reels rewound…. Good times :)

They later enclosed those projectors where they couldn’t be seen anymore. I have no idea why.

The two end cinemas had enclosed projection booths. Those projectors used the platter system. Basically, the entire film was loaded onto a large, horizontal round table. The film fed from the center of this table, across some rollers, through the projector, and to a second platter that wound it back up again. The process was then repeated, so there was no rewinding required. There were two other platters (so a stack of 4) that held movie trailers, etc. You can see what they look like here: http://www.strong-cinema.com/products/platter/

The thing I remember about the platters is, that if the film broke (and the pressure roller didn’t sense it) it was a nightmare. One time, when running the Exorcist (ironically enough) I opened the projection booth door only to be greeted by a swamp of film laying all over the floor! Ack! We had to cancel the next show and spent a few hours untangling film. We ended up cutting the film and running it up and down the aisle ways, then slowly splicing it back together in order and reloading it onto the platter… Good times :)

Another fond memory I had working there was when we would screen new movies (you had to check to make sure they were spliced together correctly, you know). We would have pretty good parties, very late at night (actually, early in the morning). That kinda came to an end when the Beavercreek cops drove by one night and saw a bunch of booze bottles covering the concession stand (the whole front of the theater was glass, so easy to see in). Screening parties were never as much fun after that.

The cinemas got robbed once (around 1980 I think). A guy held up the manager depositing the nights receipts at the bank nearby (the money was put in a bag and dropped into the night slot at the bank around 1-2am everynight). It was several thousand dollars. Turned out to be an inside job… one of the usher’s/projectionists was busted for it.

The Beaver Valley Cinema also had several pinball and video game machines in the lobby. The employees figured out ways to get free credits on several of the machines. You could use a coat hanger on the Clown Jump machine… and you could hit one of the pinball machines just right to get credits. I’ve been addicted to pinball and video games ever since. (I’m sure I still have the Clown Jump high score:)

Since I knew how to run projectors, I got gigs at several other theaters in Dayton (although I was never union). I worked the Dabel, Salem Mall Cinemas (where I once accidentally skipped a center 20min reel of the Superman movie… opps) and one of my favorites, the Kon-Tiki (I remember running Creature from the Black Lagoon in 3D there! Oh, and Caligula…. that was an experience. And I played my first PacMan game there). I also had the pleasure of running the “Midnight Movies” at the Dabel in the late 70’s. I was fun to sit in the projection booth and look down at all the wasted people watching Pink Floyd movies, and rocking to the mirror ball/ flash pods/ light show. Splitting up confiscated goods at the end of the evening was always a treat :). That and kicking out passed out folks.

Good times. I miss it sometimes. However, I built my own 126" screen theater in my basement, so I’m still at it :)

After the showing we attended, there were long lines of folks around the block. I went home, quickly fashioned a toga from a bedsheet, put on sandals and resurrected some of the Latin I’d previously learned back in high school: “De profundis, clamavat ad te, Domine! Dona nobis pacem!” or “Quotidianum da nobis hodie” or “Mater Caesaris erat meratrix!” (The last one roughly translates to “Caesar’s old lady was a hooker.”) Imperiously intoning all of the above, I walked among the eager, milling throng and added in English, “Caesar himself urges you to save six denarii and go get a pizza instead. My cousin ‘Caligula’ bites the big one!”

To our amazement, a few smart ones actually listened and dropped out of line. I had struck a blow for taste and against Bob Guccione & Co.

Yeah they are open again. I used to work for the company thats running it currently and I got emailed an advertisement for a Christmas Party Movie night there.

Sad but inevitable news: The Beaver Valley Cinema was demolished on December 11, 2015 to clear the site for ‘future development’. Here is a link to one article referencing the razing:

This opened on December 23rd, 1977. Grand opening ad in the photo section.