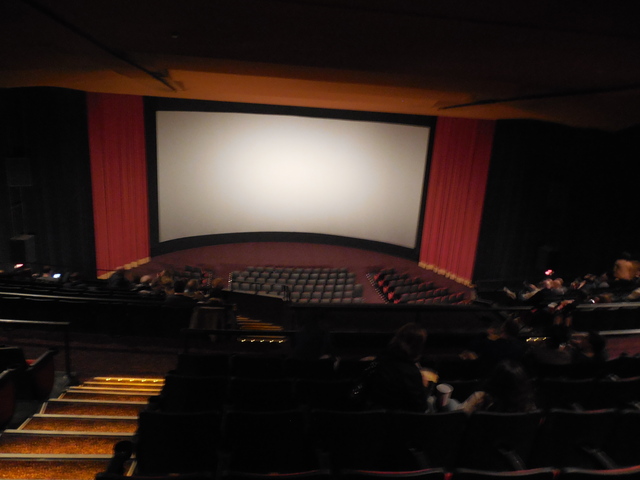 Opened by Warner Brothers on October 29, 1936, the Uptown Theater is the last movie palace in Washington, DC. The Uptown Theater is located near the Cleveland Park subway stop on the Red Line of the Metro. Many restaurants are on both sides of the street.

The theater opened with a seating capacity of 1,364 (914 seats in the orchestra and 450 in the stadium seated balcony). The proscenium was 44ft wide x 26ft high. The Uptown Theater was designed by theater architect John Zink, a top designer of Art Deco and Art Moderne style movie houses. In 1939, Zink designed Baltimore’s historic Senator Theatre.

In the early-1940’s, the auditorium’s side walls were covered with fabric and the ceiling was altered. In the fall of 1956, the auditorium was remodeled to allow films in wide screen Todd-AO. “South Pacific” ran for seven months in 1958 and “West Side Story” ran for nine months in 1961. In 1962, the auditorium was basically gutted with the proscenium removed as it was remodeled to show 3-strip Cinerama films. The original projection booth remains at the top of the balcony, but new booths were added at the front of the balcony. Since Cinerama ended, the center front booth continues to be used.

The World Premiere of “2001-A Space Odyssey” was at the Uptown Theater on April 2, 1968, in its original two-hour and 40 minute version. Kubrick trimmed 20 minutes, and the movie was then shown for 51 weeks. Local theater operators Circle took over, and that company’s founders continue to own the building, though succeeding movie operators lease it. In 1987, Cineplex Odeon took over, and that company later merged into Loews, which in time merged with into AMC.

Many films were shown in their original 70mm runs, and later, in reissues, to sold out crowds. The restored “Lawrence of Arabia” was shown in 1989, with director David Lean attending the premiere. The restored “Spartacus” was shown in 1991 and the restored “My Fair Lady” in 1994. Cineplex Odeon refurbished this palatial movie house in 1996, reducing the seating capacity to 840 and reopened it with the restored “Vertigo”. In 1997, the Uptown Theater was host to the re-release of the Star Wars saga (aka “Star Wars: The Special Edition”). On opening day, the ticket lines wrapped around the block, turned the corner, and continued several blocks away from Connecticut Street. New prints of 36 classic films, starting with “The Jazz Singer” were shown in 1998 to celebrate 75 years of Warner Brothers movies. The other restored classics included “Rear Window” in 2000, and in 2001, a 20th anniversary run of “Raiders of the Lost Ark” and the movie “2001: A Space Odyssey”. In 2003, the Director’s Cut of “Alien” was shown, and in 2007, “Blade Runner, the Final Cut”.

First run, blockbuster mainstream movies are the mainstay. Known for having the largest screen in DC (its curved screen measures 32 feet tall by 70 feet wide for ‘scope films), the Uptown Theater has been the best place to see event movies for several decades.

With the Disney film “Onward” AMC ceased operating the Uptown Theatre on March 12, 2020. It remains to be seen if another movie theatre operator will take over this much storied, much beloved movie theater.

I agree. Just like the Paris in NYC, leave the seats alone. Its an old theatre and should be left as such.

Sounds like they let the lease expire and opted to not renew rather than downgrade it to AMC classic. The only single screen theater they have left is a IMAX in Chicago, IL at the navy peir

If Landmark is successful in reopening, I don’t see how economically viable it will be to keep it a single screen. They’ve got to at least twin or triplex the place. They could turn the balcony into another single or twin..or more depending how much of a shoebox theater you want. Sounds depressing.

Parking is difficult, unless your patrons take the Metro. I don’t. Back in the day, you could park in the residential area adjacent to the theater but now they’ve got stickers so that isn’t going to work, either, except for the non-enforcement hours, which I don’t recall off the top of my head.

I wouldn’t expect it to be cut up (and there are many reasons as to why). If it was, it would lose its appeal extremely fast and likely make it not worth the hassle/cost.

My guess is that they would try to pair it with E-street to book it like one complex, in a sense. This was done back in the day to ensure that the Uptown to eject a lower performing title to Wisc. Ave cinemas or another LCE (and before that Circle) theatre. Heck, I remember a time when Circle would offer a studio a 2-week run in a take it or leave it fashion because that theatre gives a movie credibility, not vice-versa.

We’ll see. This is a different world in many ways.

I heard over the local news station that the neighborhood board association gave their approval for some kind of liquor permit to Landmark Theaters. However, it should be noted they didn’t apply for one, nor stated any intention to lease the theater. I suppose it was a gesture to entice Landmark to take over the venue.

I was over in the neighborhood the other day and there is no liquor license signage up, but according to another friend, the older prior seats were being taken out earlier in the week. All I know at this point is that Landmark IS, and will be running this theatre. However there’s been some alarming news/rumours that they might twin the theater, which would be horrible. In somewhat related news, a friend, who up and just literally dumped me for reasons unknown, who worked for Alamo Drafthouse corporate, said that the December opening of the Rhode Island Ave. theatre’s ‘Big Show’ screen would exceed the Uptown’s screen by some twenty feet, making it the largest screen in DC proper.

Since for years, I’ve sat in the Uptown balcony, it would be disappointing if the balcony became a 2nd screen. It the entire theater was divided left to right, that would be even worse. New seats would be fine. I doubt Landmark anywhere has any Dolby Vision or Dolby Atmos surround sound, but that would be great, too. If Landmark could get the curtain used again, that would also be nice.

Here’s a new 4-page 50th anniversary FIDDLER ON THE ROOF retrospective featuring a roadshow playdate chronology and historian Q&A. The Uptown’s 57-week run is mentioned in the piece.

Another 2021 article about possible renovation: