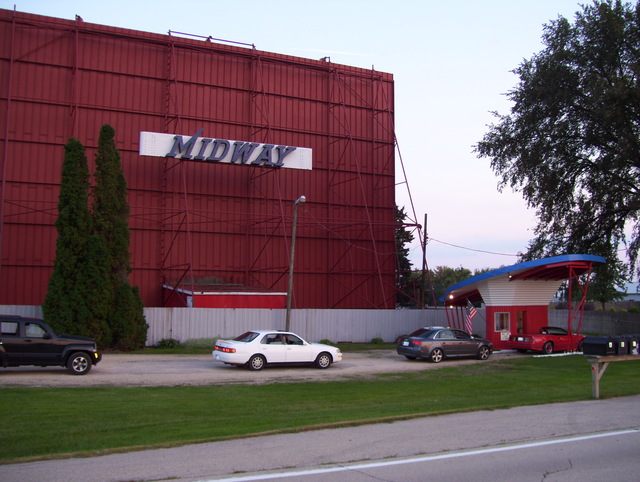 The Midway Drive-In opened October 1949 in Sterling, IL. The theater has been under its current ownership since 2007 when it was restored. It shows first-run features on its single screen.

The Midway Drive-In also has a playground and a concession stand with everything from popcorn to pizza. The drive-in’s season runs from April to September, and in October a ‘Fall Festival’ featuring corn mazes, pumpkins, fall themed refreshments, fun & games for the whole family, amusement park rides, and in the evening Haunted Attractions. The Midway Drive-In also hosts live entertainmet and concerts.

Who owns this theater now? Sensible Cinemas no longer lists it. 21st Century Cinemas, owner of Dixon’s Plaza 4 (which was co-owned with the Midway Drive-In for a while) does not list it, either. The phone number has usually been disconnected during the off-season, but it remains disconnected now in mid-April. I hope it has not closed permanently.

To my knowledge, they are not a previous owner. Unfortunately, Bowman doesn’t seem to have a Web site to confirm that.

My sister tells me that the marquee currently indicates the theater opens for the season on May 5. I guess that answers my question.

Below is the updated info for the Midway Drive-In

The Drive-In looks so much better than when I came through 8 years ago and photographed it. Best of luck with it.

Thanks Norman! I’ve seen some of your other photos. You’ve done an amazing job documenting classic theaters!