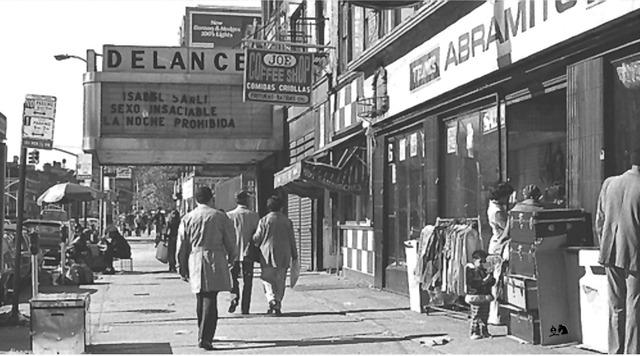 Not to be confused with Loew’s Delancey Theatre, this modest sized theater opened in March 1922. By 1926 it was operated by the Meyer & Schneider circuit. It played Spanish-language films for a good part of its life. It was still open in July 1985. Later closed and used as a storage facility for a lumber company. One day in the early-1990’s the theater collapsed and had to be demolished shortly thereafter.

Thanks Tinseltoes for the vintage photos. I hadn’t realized that the original marquee was so extravagent and included the blade sign, and that that portion of DElancey St., south of Allen was so vibrant with activity. In my memory I only saw the non-descript stainess steel-yellow backdrop box.

As for any confusion with the Winston, that theatre was on Clinton St, and is listed in CT by its original name, the Palestine. The narrow lobby of this house had a large “W” set in to the inlay flooring.

The New Delancy was owned by my family Orjelick-Theaters. At its peak my grandfather owned 15 movie theatres. Many closed prior to when I was born in 1976. They were small family theaters that usually had 1-2 screens. Many of theaters included spanish films at one time. In an article I have about the Orjelick-Theatres dated June 11, 1987 it stated, “One by one, those theatres went under unable to survive the advent of the suburban multi-screen franchise cinema…By the 1980’s the Orjelick-Theatres had dwindled down to three properties to include the Art Theatre in the Bronx, the New Delancy in Manhattan and the Hoboken Twin in NJ.” The only other theater I remember that my family had owned was called the Colony Theater and was located somewhere in NY.

Just wanted to add my belated thanks to Tinseltoes for posting those terrific pictures. They really convey the feel of the period. (In addition to the picture of the old New Delancey, you can also access about eight other picture pages of Delancey St., one of which features the awning of a Paramount Theater.)

I remember this theater during its Spanish days when I used to shop on Delancey St., often after walking over the Williamsburg Bridge.

Thanks for the clarification, Al. You must admit that this was the most cinematic of cafeteria signs!

It sure was. Maybe they were aiming at the movie crowd.

…and thank you all for the pictures and memories. I remember going there as a child with my grandpa and father.

Just to clarify some of the history on the construction of the New Delancey, the actual theater structure itself was built new on Eldridge Street. The entrance and lobby/foyer were converted from an older building at 62 Delancey Street, with offices on the 2 floors above. At the same time, a 2 story building with store and offices was erected on Allen Street, directly behind the theater. The Certificates of Occupancy for the two buildings that comprised the theater were issued March 28, 1922, while the Allen Street structure was issued April 18, 1922. Delancey Theatre Inc was the owner of all three buildings.

In 1981, the offices above the lobby were legally converted to residential apartments. In January, 1990, a complaint was filed against the property as being “vacant, open and unguarded.” A follow-up inspection found “first floor construction in progress without permits.” In early 1993, a roof collapse was reported, followed by a report that a section of the Delancey Street facade was “out of plumb” by about 4 inches and the east facade on Allen Street had cracks along the first and second floors. The building was noted as being in danger of collapsing. A 1994 unsafe building violation noted failure of the owner to maintain the roof and wall that had collapsed a year earlier.

In August, 2001, a Certificate of Occupancy was issued for a new building, constructed in the combined footprint of the three original lots. The building, which houses and is owned by the Chinese Alliance Church, appears to follow the old footprint of the New Delancey Theatre. Street views show that the Allen Street portion of the lot is being used for church parking.

Was this the theater that in the late 70’s or early 80’s played chinese language films? I remember 8x10’s in the lobby of actors with signs saying “Shaw Bros. Featured Player” or something like that.