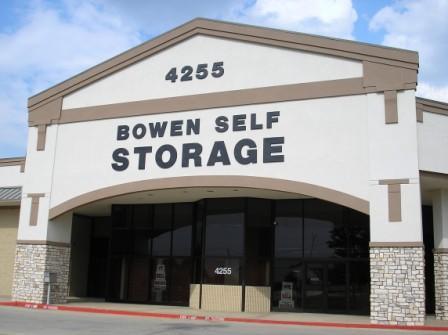 United Artists opened the Bowen 8 May 24, 1985 seating 2,350. A rather nondescript building. It has a white border running about a third of the way down with a large red stripe and the rest in a dark forest green. A double window box office on the outside with the entrance doors on each side. It had a large lobby with the concession located in the middle. Small slanted floor auditoriums with staggered seating. It closed in the early part of 2004.

I worked there from 2000-2001. It was now been remodeled and is a self storage building, they also built a bank on their parking lot

For United Artists Circuit, 1984 was the year of the 8-plex. In the DFW area opening that year were the almost identical UA Las Vegas Trail 8, UA South 8, UA North Star 8 and this theater, the UA Bowen 8 in South Arlington. South Arlington and southern Grand Prairie to the east and southern Fort Worth to the west would become a major cinema-going corridor and the newly created Interstate 20 would soon create a retail nexus in South Arlington. The UA Bowen opened in 1984 with 2,160 seats and would be joined in December by the AMC Green Oaks, another eight-screen operation opening just about a mile away in 1984 as the circuits competed for clearances throughout the 1980s and 1990s.

General Cinema would open an eight-screener in 1986 and the Parks mall would come online within two years about two miles to the east. Up and down I-20, theaters sprouted at exits such as the Sony 20 & 287 multiplex to the west, the Cinemark Grand Prairie megaplex to the east, the Sony CityView at Bryant Irvin, et al. The Bowen did have an advantage in that a night at the theater could include dinner and/or drinks at the neighboring, popular sports-themed Bobby V’s Sports Gallery Café operated at that time by the Texas Rangers' baseball team manager. And UA put some money into the Bowen as the competition increased. Enhancements included digital sound, increased concessions, and new paint and carpeting. But by the mid-1990s, the Bowen was under competition from a new breed of megaplexes. UA, itself, would build stadium-seating destination theaters in Arlington with its Eastchase Parkway to the north and its Grand Prairie complex to the east.

The Bowen just didn’t have the architectural flair that UA was putting into its new theaters. Explained John Panzeca, vice president of United Artists Realty in charge of the company’s UA Plaza in Dallas project said of theaters such as Bowen 8, South and Vegas Trail, “For years we built theaters that were little, rectangular boxes…. I used to point with pride to how inexpensively I could get those projects to come in.” That said, UA unveiled a plan to resurrect the quickly aging Bowen 8. United Artists announced late in 1998 that it would expand the Bowen to a 14-screen, stadium-seating theater to open in spring of 1999. But AMC decided to outmaneuver UA by announcing a megaplex to open within the Parks at Arlington mall. UA was running into financial issues toward the end of the century and expansion plans such as those announced at the Bowen were cooling.

The Bowen 14 stadium seating expansion didn’t take place but the theater had a nice uptick in business because AMC would close the arch-rival Green Oaks in 1999 deciding against a lease renewal as it prepped the new mall megaplex. Fortunately for the UA Bowen, the AMC Parks wouldn’t open for another three years. Meanwhile, General Cinema would shutter all of its Tarrant County locations on October 5, 2000 including the nearby Arlington Park Square 8. There was no more turf fighting for film clearances for the Bowen until the Movie Tavern reopened the AMC property in summer of 2002. But foot traffic was seriously hurt when the AMC Parks finally launched on November 6, 2002.

With the Bowen’s 20-year lease coming due and 80’s era multiplexes shuttering all over DFW, employees had to sense doom. Neither the UA South 8 nor the UA Town East made it to the end of their 20-year leases. The UA Las Vegas Trail 8 was downgraded to dollar-house sub-run status and was going to close on its 20-year lease. Regal had taken on the struggling UA circuit and had no love for or money to invest in fading properties. The announcement for the UA came as the theater closed up shop on quickly after evening shows on December 14, 2003 fulfilling its lease. And within a year, hopes for a cinematic treasure rebirth at that location were shot down as Binks Construction invested $1.5 million in the property to convert the theater into a two-story self-storage building with elevator that was still operating in the mid-2010s. However, the UA Bowen was a profitable 8-screen multiplex bringing many fine films to the area and proved to be a survivor fulfilling its 20-year lease. And the popular neighboring night spot Bobby V’s was continuing to draw patrons into the mid-2010s.