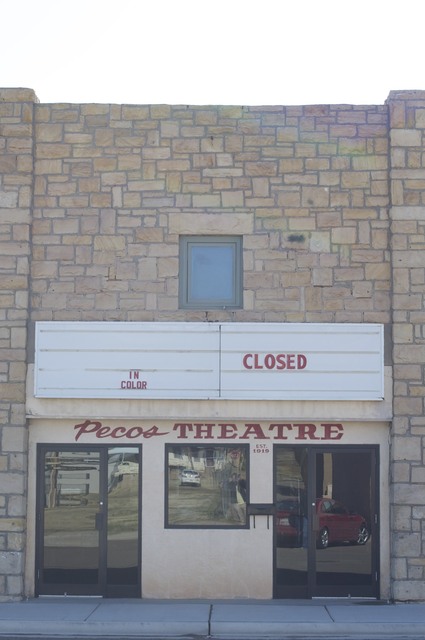 The El Paso Tiempo Theatre was opened in 1919. Located along historic Route 66 (4th Street) in Santa Rosa, over the years it was renamed several times. By 1934 it was the Kiva Theatre. In July 1936 it was renamed Pecos Theatre. In 1965 following a remodel it was renamed Rodeo Theatre. It operated as a 350-seat movie house until closing in November 2010 with Jim Sturgess in “Legend of the Guardians:The Owls of Ga'Hoole”. It features a Mission style façade of adobe and stone.

It was purchased by Guadalupe County in January 2016 and following renovations which included a new marquee and vertical sign installed in June 2019. It was reopened on September 7, 2019 with Dwayne Johnson in “Fast and Furious Presents:Hobbs and Shaw”. The seating capacity has been reduced to 126 leather chairs with retractable armrests and cup holders, and a retractable screen. The theatre has Dolby surround sound.

Sell Concessions and make Change-overs at the same time.WOW.

My memory of the Pecos Theater goes back to January 2, 1983. I was on my way to my first active duty military assignment and had just driven 1,100 miles. I ran into the tail end of a snow storm in western Oklahoma and the Texas Panhandle and did not break free of the storm until Amarillo, TX. As soon as the sun barely plied the eastern horizon I pulled into Santa Rosa, NM and convinced the elderly desk clerks at the Motel 6 to allow me to check in early.

After carting my luggage to my room I felt wide awake enough to drive into town where I parked on, what I thought was, a side street. As I strolled down the sidewalk toward a small grocery store I chanced to pass the front of the theater. Having previously worked at a cinema for years I thought it would be a great idea to catch a movie that night. Alas the theater’s posted schedule indicated that it was only open a couple days of the week and Sunday January 2nd was not one of those days.

From what I can tell, this Theatre is still open…
RAC Photography

Opened as the Rodeo Theatre in 1920. Should have an AKA Rodeo

Purchased by Guadalupe County in January 2016.

More details two weeks later. Boxoffice, Oct. 9, 1948: “SANTA ROSA, N. M. – Interests of Max Gugelman and Max Wortheim in the Pecos Theatre here have been purchased by Lester Dollison, widely known Texas operator. The house will be remodeled and redecorated, and new lighting and projection equipment will be installed.”

Boxoffice, March 8, 1965: “As promotion coincident with remodeling and repainting of the Pecos Theatre in Santa Rosa, N.M., owner Les Dollison has asked his patrons to submit suggestions for a new name for the house. He ran an ad in the local weekly paper suggesting that 30 years is long enough for the theatre to maintain the same name. He said a new name would fit in nicely with the remodeling and repair work in the house. In the ad, he carried a ballot for suggestions, with the winners to be selected by a panel of local merchants. The winner of that contest, announced February 14, was given a year’s free pass to the house.”

The Film Daily, March 8, 1934: “The Kiva in Santa Rosa, N. M., one of the few houses in this (Denver) territory still using discs, will install sound-on-films.”

Motion Picture Herald, July 25, 1936: “T. A. Whalen, who recently purchased the Kiva theatre at Santa Rosa, N. M., from R. L. Riddle, has reopened it as the Pecos after remodeling.”