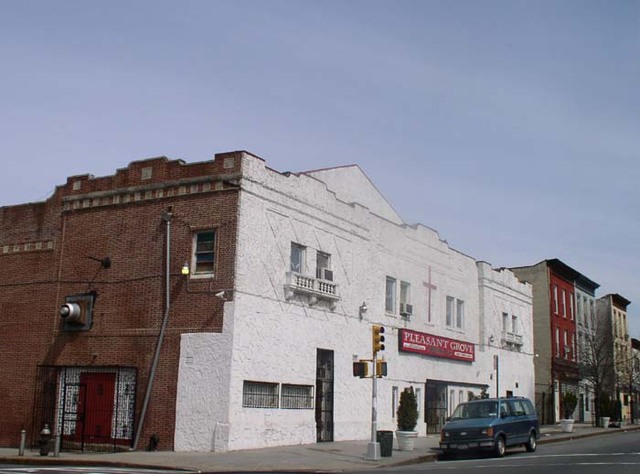 Originally known as the Normandy Theatre, it was opened on September 26, 1919 with William Farnam in “The Wolves of the Night”. The theatre was equipped with a Kimball theatre organ. It was re-named the Howard Theatre in 1933 and listed in Film Daily Year Books as catering to “Negro” audiences. The name “Normandy” was later moved to the Elton Theatre in the Boro Park section of Brooklyn.

The Howard Theatre closed in July, 1949, but was sold for cash the following year to the Melrah Holding Corporation, owned by Harry Brock, according to a report in the October 17, 1950 issue of the New York Times.

Curiously, “Melrah” is “Harlem” spelled backwards, and “Harry Brock” was also the name of the millionaire junk dealer in the 1946 hit play, “Born Yesterday”.

The NYT story said that the Howard Theatre would be re-opening, and it became the Carver Theatre in October 1951. After finally closing in February 1958, it became an evangelical church.

A friend sent me a slightly larger image. The marquee reads:

You can hold on to the medal. Jerry

Here’s a google street view of the Howard Theater as it appears today:

A photo of the Carver when it was the Normandy. Enjoy – and also take a look of the other shots of fulton St. in the attachment.

In taking a second look at the picture, I noticed that it was snapped AFTER the Normandy had become the Howard, whose name dimly appears on the awning. The far more prominent “Normandy” sign reflects an era that had already passed. Seeing the Carver’s two former names in the same photograph is very interesting and pretty unique.

Here’s a link to the Carver/Howard when it was known as the Normandy Theatre on Fulton Street & Howard Avenue.

This page from the Brownstoner weblog provides a brief history of the Normandy Theatre, which was built for Herman Weingarten in 1919, and was designed by the architectural firm Montrose Morris Sons.

Thanks so much for linking this article. I noticed that this theater was built for someone named Weingartner and that its structure is not unlike that of the old Parthenon Theatre, which existed along the Brooklyn/Queens border in Bushwick/Ridgewood. In addition, the Parthenon was originally known as “Weingartner’s Rarthenon”. This got me to think if: (1) the same Weingartner owned both theaters; and (2)both theaters were designed by the same firm. Food for thought.

Just one small correction: the old Parthenon was known as – as was the Carver – Weingarten’s. I got the spelling wrong. But the names are definitely the same in both cases.

After some digging, I’ve discovered that the Parthenon was designed by architect Harry A. Yarish. Yarish designed a couple of projects for Weingarten, but so far the Normandy/Carver is the only Weingarten house I’ve found attributed to Montrose Morris Sons.

I know Jackie Gleason is most famously linked to the Halsey Theatre, but the Normandy would have been closer to his childhood home of 328 Chauncey Street, just 4 blocks up Howard and around the corner. I see how the theater was listed as catering to “Negro” audiences under the name Howard Theatre in the 1930’s, and things being what they were in those days, I wonder if a young Gleason may have ever made his way down to the Normandy – particularly before its changeover to the Howard.