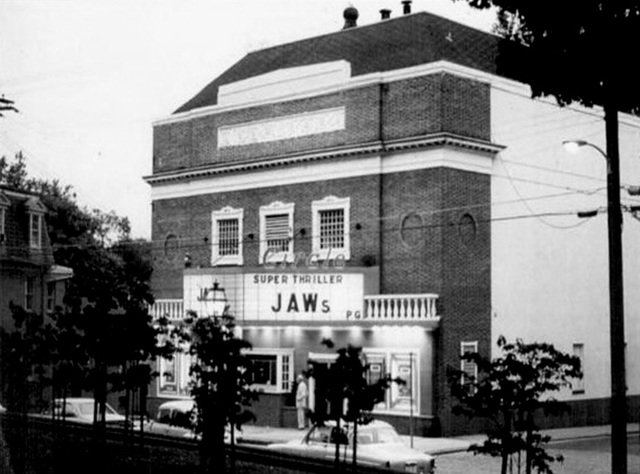 This 1,800 seat movie theatre opened as the Circle Playhouse in 1920, later dropping the ‘Playhouse’ part and being just the Circle Theatre. The architect was Henry P. Hopkins. Seating was provided in orchestra and balcony levels and by 1950 it had been reduced to 824 seats.

It was closed in 1979 and stood empty for many years until it was used as a live venue known as the Annapolis Theatre of Magic. That venture eventually closed and the lobby space later housed a coffee house which has since closed.

The Architect was Henry P Hopkins

I have now found information that the Circle Theatre closed as a movie house in 1979.

This is excerpted from the Annapolis Capital in October 1979:

The final reels may soon be rolling at the remaining two movie theaters in downtown Annapolis. The Playhouse Theatre on Main Street and the Circle Theatre on State Circle are both reportedly up for sale and the Playhouse has two prospective buyers who want to convert it from a movie house to a showcase for live theatre productions. David O. Colburn, who manages both theaters for F. H. Durkee Enterprises Inc. of Baltimore, said the Circle, which dates at least to the early 20s is for sale.

The old ornate theater, with red velvet curtains and a majestic high ceiling, is now losing $500 a week, according to Colburn. There are some nights when the theater has been entirely without customers. As for the Playhouse, which used to be known as the Republic Theater, two Annapolis developers, Theodore C. Samaras and Douglas Cosgrove, who own other downtown properties, say that once they finalize the contract to buy the building, it definitely will not be used as a movie house. Samaras said an agreement was made with Durkee not to operate it as a movie theater, “We have no interest whatsover in movie theaters,” he ‘said. Instead, Samaras and Cosgrove hope the Playhouse will become a place where producers can show live theater, on off-Broadway tryout circuit. Now, Samaras said, he and his partner are analyzing the conversions of other downtown movie theaters in order to get an idea what might be suitable here. “We have a lot of options open to us,” Cosgrove said.

A spokesman for Durkee, which operates the Playhouse, maintains that neither the Playhouse nor the Circle have been sold. August Nolte, who identified himself as vice president, maintained that neither theater is for sale now, although he said the Circle was for sale two years ago. He refused to discuss the financial condition of either movie house.

Downtown movie theaters generally have run into hard times in the last two decades, in stark contrast to their glory years in the 1930s and 40s. Robert K. Campbell, a former alderman and longtime Annapolis resident, recalls that a former Maryland Governor would take children to the Circle Theatre the day after Christmas as part of the holiday celebration. And he recalls going to the Playhouse on Saturdays and paying 10 cents to see movies in the 1930s.

I lived in Annapolis from 1981 through 1983. I recall the theater being open during that time, and watching Raiders of the Lost Ark with friends. The concession stand was actually a few vending machines.

I distinctly remember seeing Superman III at the Circle in the summer of ‘83.