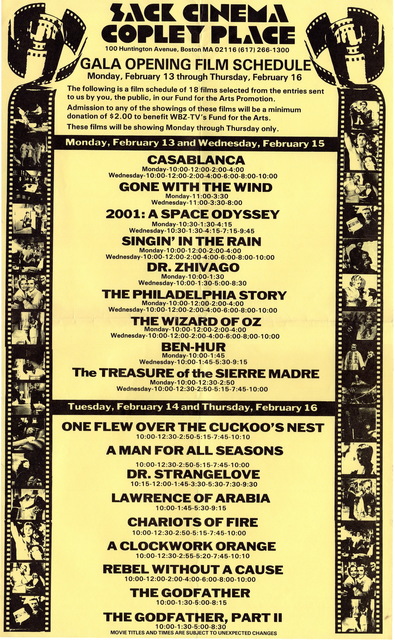 A cramped uncomfortable mall multiplex opened by Sack Theatres February 17, 1984, the Copley Place was widely hated for its postage-stamp screening rooms that often required viewers to look upward at the movie screen.

It was initially a showcase for foreign and art films, but later became a mostly mainstream house after Loews began closing its other Boston theatres right and left in the 1990’s.

After Loews opened its state-of-the-art Boston Common multiplex in July 2001, the Copley Place again became a home for art films. But Loews never put much energy into repositioning it, and most of its films were also showing at much more comfortable theatres in Cambridge, Brookline, Newton, or Waltham.

The Copley Place closed its doors forever after the last shows on Sunday, January 30, 2005. It was replaced by a Barneys New York clothing store. Its closing left central Boston with only two movie theatres: Loews Boston Common and the AMC Fenway 13.

Several comments above mentioned the Institute of Contemporary Art, its temporary use of one screen at Copley Place, and the ICA’s old theatre on Boylston Street. In 2006, the ICA moved to a beautiful new building on Fan Pier, including a steeply raked theatre used for both live performances and movies. I’ve added it to CinemaTreasures, as the Barbara Lee Family Foundation Theater at the ICA.

this might have been posted,Could have missed it ,but “THE BOSTONIANS” with Christopher Reeve had the premiere here.It broke all house records at the time over the weekend.

Yes, it was really small. I saw Napolian Dynamight there. I think it was one of the last movies they showed there.

Having just been to Boston for the first time, I’m surprised that someone (Landmark, Angelika, Sundance) didn’t grab this site, gut it and reformat as a 5 or 6 screen complex, given it’s location by Prudential Center, Copley Place and all the hotels, restaurants etc in the area. Seems like the perfect location, right in the middle between the AMC Loews Boston Common and the Regal Fenway. If they had combined some of the cinemas and made them larger with larger screens, sound systems etc,this may have made a great little multiplex. Found it odd that this hadn’t happened given the location.

This opened on February 17th, 1984. Its grand opening ad has been posted here.

If my memory serves me correctly, this is where I saw the title: “The Adventures of Buckaroo Banzai Across the 8th Dimension.” It was the last time I ever stepped into that cinema.

Boston -Sack Theatres have firmed plans for a nine-screen plex in Boston to show foreign product.

A September, 1983, opening is planned for the plex, to be built in the Copley Place commercial development by Urban Investments and Development with Sack’s 15-year lease carrying an option for a 10-year renewal.

The nine theatres will seat from 50 to 200. In addition, the plex will contain an espresso bar.

How the Sack plan will affect the Orson Wells plex, Cambridge, Mass., plan to build a foreign film outlet in downtown Boston is yet to be determined.

First I’ve heard of the Orson Welles plan to expand into Boston. Do you know anything more about this?

Is this the Orson Wells they are refer to, expanding to Downtown Boston?

Yes, but it burned down in 1986. We’re talking about a (never-executed) plan from more than 30 years ago.