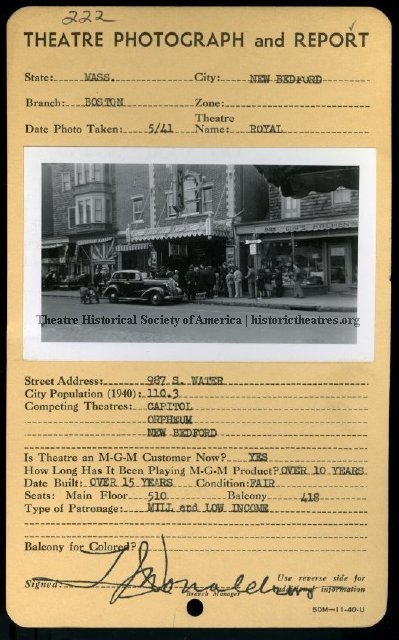 One of the numerous theatres that used to exist in the downtown New Bedford area. The Royal Theatre was opened prior to 1927. It was still open in the early-1970’s screening X-Rated movies.

Judging by the address, this theatre seems to have been located in the South End, not far from the Orpheum and on the same street.

Hi, I remember the Royal Theater when I was in my teens. I went there one time.It was located up the North end about maybe 3 or 4 miles from the Orpheum Theater, which is located in the South end of New Bedford Ma. The Royal Theater was still open in the early 70’s showing x Rated movies.

The Royal Theater was located on South Water Street in the south end of New Bedford, a short walk just two or three blocks from the Orpheum Theater (which still stands un occupied today). The area was one of the most vibrant shopping areas in the city in the 1950s and as such had a great deal of pedestrian traffic. The Royal was the original â€œDiscount Theaterâ€ in the city usually featuring reruns, on a par with the local drive-ins of the time. The Royal was anything but, it was very small, dark and dingy with only two isles. My mother always hating me going there, telling me it was infested with rats. (never saw one)

Bsilva, yes, I thought it was in the South End, near the Orpheum. I’m from Providence and don’t know the city that well. I paid a visit to the Orpheum a while back and took some photos. I found the exterior overwhelming. Have you been inside? Could you post something on its page?

There is a MGM Theatre Photograph and Report form for the Royal Theatre in New Bedford with an exterior photo dated May 1941. The building had a narrow left bay with a store, and a wide right bay with the theatre’s entrance. There was a vertical sign and a very fancy rain canopy. In the photo, a short line of patrons is waiting to go in. The Report states that the Royal is at 987 South Water St., that it has been showing MGM films for over 10 years; that it’s over 15 years old (in 1941); and in Fair condition, and has 510 seats on the main floor and 418 balcony seats; total: 928 seats.

The Royal is listed in the 1927 Film Daily Yearbook as having 900 seats and open daily.

PHOTO OF ROYAL THEATRE, 1941, IN MGM REPORTS Thanks to Theatre Historical Society of America.

Lived in the South End from 1953 – 1960. Used to go to the Olympia on Water Street nearly every Saturday afternoon; (25 cent matinees!) I remember the Royal just a block or two to the north of the Olympia. And yes, bsilva is right, Water Street was a bustling commercial center at the time. That’s where the great Silverstein’s was originally located. Of course, this was all before urban removal.

Oops, I meant the Orpheum Theater, not the Olympia. The Olympia, of course, was downtown on Purchase Street just south of the bus station.

The Royal Theater was on water street in the south end. In 1955 I would go there and pay 10 cents to watch 2 movies and a serial and cartoon. It was a small theater on one level. The Orpheum Theater was only 3 businesses away on the same side of the street. If you went to the Orpheum, you needed to walk up several steps to get to the concession and movie seating. It was a much nicer theater than the Royal.